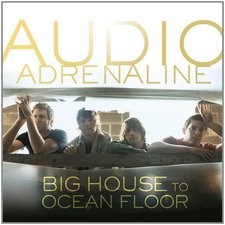 The posthumous release of the original Audio Adrenaline's Big House To Ocean Floor is no coincidence. Since the announcement of the band's "return" with an almost all-new member lineup (Bassist Will McGinniss is the only original member), the name Audio Adrenaline has been back in the spotlight in the Christian music market. And with Forefront Records not really being anything more than a name stamped on collections like these from former roster members (and new TobyMac albums), there's nothing new at all about Big House To Ocean Floor. It exists solely to cash in on the resurrection of a beloved CCM band. In fact, while concert-goers will likely hear a batch of these songs if they catch the current lineup live, they won't be hearing the same vocalist... at all. That makes a release like this a head-scratcher at best (It would be like having bought a brand new Newsboys hits record right after Peter Furler left and Michael Tait took over).

All cynicism and motive-questioning aside, as a self-proclaimed fan of this era in Audio Adrenaline's memorable career, I have to admit that this batch of songs is actually pretty solid. Granted, albums like these are less crucial these days, given the ability for fans to pick and choose singles off of digital music providers like iTunes and AmazonMP3, but those who want to take a fond trip down memory lane, or be introduced to 16 of the band's most career-defining songs without having to ask around or do research, will find Big House To Ocean Floor rewarding. The collection opens with the band's most popular song of their career, the 1993 hit "Big House." From there we jump to 1999 for "Get Down" from Underdog, then stay on that album for the missions-inspired anthem "Hands and Feet" and then hop in a time machine and return back to 1993 for the band's own anthem "We're A Band"...before going back to Underdog for its title track. If anything, there seems to be little rhyme or reason to the songs' placements in the track order, and it may seem a little jarring to be jumping around between early 90s pop, late 90s rock, all the way to AC radio pop from a decade ago. However, since we are living in the age of playlists and listening to our own music libraries on shuffle, Big House To Ocean Floor plays out exceptionally well as a collection of some of Audio Adrenaline's best "on shuffle." While jumping from the Mark Stuart fronted 1996 hit "Never Gonna Be As Big As Jesus" to the Tyler Burkum fronted "Leaving 99" in 2003 is almost like listening to two different bands entirely. The combo of the two's vocals in the 2005 single "King" that follows helps pull it together a little better, however. We then stay on that latter album, Until My Heart Caves In, for the concert mainstay "Clap Your Hands" (which arguably probably should have been this project's opener) and the upbeat rocker "Mighty Good Leader" (also a distinct album lead off track) before returning to Burkum's leads in "Pierced." But classic AA fans won't have to wait long to hear some more 90's favorites; "Chevette" and the title track from Some Kind of Zombie, both from 1997, are next, and then we leap to 2001 for the groovy pop sounds of "Beautiful," before going back to 1996 for "Man of God" and then ending with 2001's "Ocean Floor."

While it's easy to see through the reasoning for the existence of a collection like Big House To Ocean Floor (complete with its uninspired and literal title), a fan of the band's work can't overlook the content included. Those same fans could probably question the omission of such necessities as "I'm Not The King" or "Secret" from Bloom, or really any number of other gems from throughout their years, but this track list is surprisingly solid and thorough, covering all of their studio albums, save for their self-titled debut (which they themselves wish to forget). It's a great collection of songs that spans twelve years of music-making and ministry, but one can't help but think it actually makes little sense to release today in 2013. Sure the band is back in some form, but with a new lead vocalist in dc Talk's Kevin Max filling in for Stuart (who has since lost his voice), any new fans probably won't appreciate the band's former identity. (Perhaps if the project closed with Stuart's duet with Max on "My World View" from 1993, it'd have served as an eerie way to introduce listeners to a passing of the torch that "began" twenty years ago... but I digress.)

As a collection of Audio Adrenaline favorites, Big House To Ocean Floor trims the excess and goes right for the gold. However, if one would want a bit more bang for their buck, the 2009 release of The Ultimate Collection, which boasted a total of 24 tracks on two CD's, including some rarities like their Christmas song, is probably a better buy. As a collection from the label owners who still retain the rights to the band's back catalog, Big House To Ocean Floor is simply a money grab (the recordings don't even appear to be remastered either), but when one really looks at the project for its musical content, it's tough to ignore the audio goodness included here...and a band lineup that is truly missed.