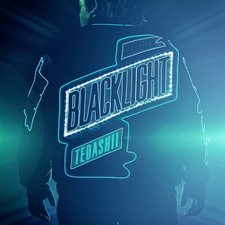 Reach Records is the premiere label in recent years for releasing top-notch Christian rap and hip-hop. Tedashii has just released his third album on the label and it seems that the trend will continue. While Blacklight isn't quite up to the caliber of Lecrae's Rehab, it is another solid release for one of Christian hip-hop's brightest artists. Though some fans may not agree, the term "solid" is used because even though it's an enjoyable album to listen to, there really isn't anything about it that screams out making it spectacular.

While there is no doubt in Tedashii's faith, or the fact that this album claims Christ as King, it feels as if it is not quite as in-your-face about it as your typical Reach Records release. This isn't to say that EVERY song has to be only about Jesus, but it's just a little different than expected. Though not all of the songs have a completely Christ-centered message, they are all positive songs, or speak of God and positive living in relative terms.

As with any other hip-hop album made, Blacklight features a wealth of guest appearances. The strange thing is that there is a guest appearance from every Reach artist, including the recently departed Sho Baraka, with the exception of Trip Lee. Pro shines on the album best "Need It Daily," KB appears on "You Know What it Is," and Lecrae makes his appearance on the slightly annoying track "Dum Dum." It's somewhat weird that Trip was not involved in this record; perhaps he was focused on completing his own upcoming album and therefore unavailable to appear here. What may be even stranger than the absences of Trip-Lee is the included guest appearance by Christian acoustic pop duo Shane & Shane on the track "Finally."

Blacklight opens with one of the albums best tracks, "Riot." The song is extremely catchy and the beat gets your head bobbing early on. Soon after it starts, Pro shows up and helps to make "Need It Daily" into what may be the best track on the album. The song is about gospel music and proclaims "Hey, it's that good news music; we call it gospel. Don't get confused, baby, it's what He used to save me, it's what He used to keep me; I need it daily." Pro steps in with a standout lyric in the second verse as he says, "Christ died for us, we'll say He's a church fan; I'm talking gospel minus the church van. I'd be a fool minus the Lord's hand. I'm so wrapped around his finger like a wedding band."

Another highlight of the record is "Last Goodbye." The track features Benjah and is a tribute to the men and women of our armed forces (The video for the song premiered on Memorial Day). The song looks at different perspectives of those who have been deployed; the first looks at a husband and wife and the second looks at a mother and her children. The song speaks of how these families are praying that the goodbye they were saying would not be their last. The track ends with the lyrics, "I don't wanna be alone" being repeated several times. The lowest points on the album are "Can't Get With You" and the Lecrae featured "Dum Dum."

With several high points and a couple of lows, the album is as stated above: solid. While you will definitely find enjoyment in Tedashii's latest effort, there is probably nothing on here that will blow you away. Tedashii offers up a positive message, solid rhymes, and nice beats on his third outing. When it comes down to it, what more could you really ask for? Any fan looking for some good positive hip-hop should give Blacklight a listen.