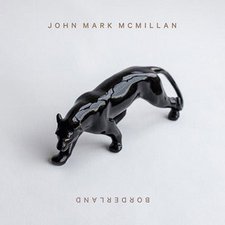 From his start, John Mark McMillan filled the void between a rightfully artistic mantra and shameless worship. While signed to Integrity Music, The Medicine and Economy both showcased this mentality, and while McMillan records independently, Borderland is the next installment in his series. Keeping in the tradition of McMillan's strategies, Borderland is a solid next step.

McMillan has always been an experimental artist for his own songwriting, and Borderland is little exception. "Love at the End," "Guns / Napoleon," and "Monsters Talk" have diverse instrumentation that keep the album unique from previous works, while "Tongues of Fire" and "Visceral" work well to put McMillan's anthemic schemes front and center. Just as The Medicine had its "Skeleton Bones" and Economy its self-titled track, "Future / Past" serves as the showstopper of Borderland. The chorus of "You are my first/You are my last/You are my future and my past" ends up being a pivotal aspect of the track's emotional appeal, and it's the album's highest point. In these senses, Borderland does all that McMillan has made a name for himself doing: making God's name great through thoughtfully poetic but unmistakably worshipful songs. These songs only increase in value, avoiding many cliches that often occur with similar genres.

One of McMillan's main concepts is his tendency to take the time wisely to draw out some tracks to their furthest potential. In the past, this has worked well for some tracks like "Dress Us Up" and "Who Is This," but some of these similarly long tracks aren't as impactful this time. The title track, for instance, insists on a droning guitar riff as its basis; the song's dynamics improve a bit as it goes, but at least on the onset, doesn't carry a compelling melody to catch the ear. "Heart Runs" is in a similar situation, and "Counting On" is a notably difficult track to sit through, as well, and lines like "Where the bombs break/right outside my door/and I can't shake the onset of my wars/when the stakes are raised/we hold the hand we've drawn/You're what I'm counting on" aren't done justice. "Silver Shore" and "Heart Runs" have the same crowd vocals that are far too distracting to make the song any more captivating. Seemingly in contradiction to the above statements, these moments still have the potential to grow on the listener over time, even if their initial impact isn't entirely favorable.

For those who haven't bought into John Mark McMillan's approach at this point, an album like Borderland isn't going to change that outlook. But with the freedom of independence from a label, McMillan's methods are freer in their form than ever, and Borderland clearly echoes his vision. While not a completely smooth listen, Borderland is an effort from McMillan that keeps his name in the conversation as an immensely talented singer/songwriter that this industry still truly needs. It's another successful Kickstarter campaign for the books, and the worship scene has only gotten stronger.

In Borderland (the title a reference to a "place between places" that Christians reside between Heaven and Earth), after yet another Kickstarter success, John Mark McMillian offers up some of his most dynamic work. Making much use of saxophones, distorted guitars and strong percussion, musically it is very distinct from anything else I've heard that even remotely falls under the umbrella category of worship music. But by far, the most impressive thing about the album is the lyrics. Imagery runs rampant in all his lyrics that offer no shortage of depth to think about (like "Dead in the water / Like lamb to the slaughter / If the wind doesn't sing her song / And I'm speaking in tongues / Cause I need a Holy Ghost," from "Holy Ghost"). The provocatively-titled, surrender-themed "Guns / Napoleon" makes extensive use of warfare metaphors for how the Holy Spirit "invades" our lives. The apocalyptic "Love At The End," with its references to Rome and Babylon; the raw energy title track about the struggles of "living in the borderland;" and the reverent corporate worship-destined "Future / Past" complete the major highlights. This is not an album for the faint of heart or, frankly, the most casual listener. Indeed, the downfall of so much imagery is the amount of effort it takes to unpack (and thus, attempt to fully appreciate) the music. Truthfully, I was personally exhausted after only five songs almost every time I spun the album. But that is, in fact, what sets this album apart so much from the often-shallow world of worship music. This album will be hard to win over casual fans, and even seasoned fans may have difficulty liking it right away, but it may be the most rewarding worship album I've heard in years. - Review date: 3/2/14, Mark Rice

Borderland marks a zenith for John Mark McMillan. He gets better with every album, and on this one, he tackles a challenging but oh-so-relevant subject: the middle-space between earth and heaven temporarily occupied by all believers. There is appropriate dissonance throughout, while an angelic choir sings "dead in the water, lambs to the slaughter" on "Holy Ghost." Bright horns celebrate rebirth on "Heart Runs," after "Monsters Talk" has declared, "We are fragile creatures on collision with our judgment day." This is an outstanding album, with moments for corporate worship, personal contemplation, and comfort in the borderland. - 2/18/14, Mark Geil of Jesusfreakhideout.com