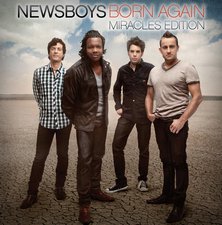 Eight months ago, the newest incarnation of the formerly Australian based band Newsboys made its full-length debut with frontman Michael Tait. The former dc Talker and Tait band vocalist had some immense shoes to fill and with insurmountable odds to overcome, the foursome set out to prove this new version of the popular band could work. When Born Again hit streets, it quickly made some serious waves with digital sales and the title track remained at the top of Christian radio charts for weeks on end. When Born Again released last summer, digital buyers were able to get a super-sized version of the album that included not only additional songs, but four new songs otherwise not found on the retail release. Fans lamented over the exclusion of these tracks from the physical release, so it wasn't long before the announcement of a re-release surfaced and a contest was launched for fans to remix a few of their songs for possible inclusion on this re-release.

Now, Born Again: Miracles Edition is a loaded, twenty-track re-release that puts most other re-releases to shame in concept. However, if you took advantage of the digital Deluxe Edition, double-dipping to get the physical copy may not be totally worth it. The four songs from the deluxe are all here - "We Remember," "I'll Be," "Give Me To You," and Tait's version of the previously Furler-fronted "Glorious" - with the addition of another brand new song, titled "Save Your Life." Added on to those fourteen songs are four remixes, with one having even been mixed by Family Force 5 vocalist Solomon Olds. So if you're keeping score, you'll realize things don't quite add up right here; the original album was twelve songs, the bonus tracks are four songs, there are four remixes and then one more new song. That should be twenty one songs, right? The new song, "Save Your Life" actually totally replaces the song "Impossible" from the 2010 release of Born Again. It's rather curious, especially since they probably could have squeezed a twenty-first track onto the disc, but when listening to the twelve-track core of the original track listing, the listener may understand the decision to replace the soulful pop song. Stylistically, while the song worked for Tait's versatile vocals, it didn't really fit in with the rest of the pop rock driven songs. However, "Save Your Life" fits right in with tracks like "Born Again," "One Shot" and "Escape," and proves to be a fine addition to the track listing. It's just always bittersweet when a band decides to drop a song that fans previously had access to.

The other four new songs that originally appeared on the digital deluxe release are decent b-side bonuses. "We Remember" feels like your standard praise and worship offering and wouldn't have been the best choice for the regular track list, while "I'll Be" was a memorable song on their Born Again EP released early last year (and was then not added to the final album due to disappointing performance at radio). The worship anthem "Give Me To You" may be the most forgettable of the bonus cuts, while Michael Tait's take on "Glorious" rivals the original version and is an excellent addition. The remixes, unfortunately, don't really add much to the release. They're mostly your standard club mixes without anything substantial added to make them stand out. The remix of "Born Again" just about obliterates any resemblance to its source material (and the beat sounds more like a poor man's version of Michael Jackson's "Thriller" than anything else), with "Miracles" and "Way Beyond Myself" not really faring too much better. After hearing Solomon Old's remix of Remedy Drive's "Daylight" last year, his remix of the already over-covered "Mighty To Save" is still a more unique take on the song, but it doesn't have the same effect and ultimately lacks in comparison to his treatment of "Daylight." In the end, the remixes may do less for the record than more and probably would have been better as a digital-only EP than added to the physical disc (Actually, I think keeping "Impossible" and dropping the remixes may have made for a stronger batch of tracks).

Nitpickings aside, Inpop Records and Newsboys give fans a real bang for their buck with this twenty-track re-release of Born Again (which also includes instructions on how to download the video for "Miracles" for free). It may seem a little soon for a re-release (however, is there really a good time for one?), but this is an especially good collection for anyone who has been interested in the album but hasn't picked it up yet. The "3D" cover seems especially gimmicky, too, but the Newsboys have often been known for spectacle - from gold suits to flying saucers on stage and rotating drum sets - so the flashy cover is actually fitting. Whether picking up a record they already own is worth the investment or not is ultimately up to the fan, but those who don't need the physical release can just grab the extra tracks off an online digital music seller. Revisiting the first Tait-fronted album as "Newsboys" still feels surreal for this particular listener who has enjoyed the band's music since John James was the vocalist, but as a pop rock record, Born Again still remains a solid release on its own. And Born Again: Miracles Edition just makes it even better.