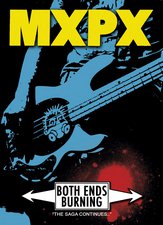 MxPx has been around for nearly 20 years, released 16 albums, 20 singles, a live DVD, toured on six continents, and sold over 25 million records. The trio from Bremerton is now releasing their 3rd film, Both Ends Burning. The film is by Brian Buchelt and far surpasses their previous two releases; It Came From Bremerton (released on VHS) and 2004's B-Movie.

In 2008, MxPx began filming with the intent to show fans life on the road with all of the highs and lows of touring. Sadly, that project never really came to fruition, but footage from that time period is finally revealed in this film. On top of footage from Indonesia, Brazil, and Chile from MxPx's 2008 tour, this project also features a retrospective from other bands, press, and fans on what MxPx has meant to them. Members from the bands A Day to Remember, Flatfoot 56, Simple Plan, Against Me!, Every Avenue, Descendants, Relient K, and Less Than Jake discuss the inspiration received from MxPx as well as their favorite albums. The documentary also has Jerry Bryant of JBTV (music videos), Kevin Lyman of Warped Tour, and Mike Shea of Alternative Press discussing some of the band's history and the improbability of a band making it 20 years, calling MxPx a legacy band.

The film finds the veterans at a crossroads in their career. 2010 held what seemed like devastating news to the band and their fans. Drummer, Yuri Ruley, announced his planned departure from the band to pursue a full-time career outside of music. Guitarist, Tom Wisniewski, also took a job outside of music. Yuri's final show was to be at Hard Rock Las Vegas; there the band performed the entire Life in General album--the album all three members believed to have made them a real band--from start to finish. It was the first time the band had done this and seemed a fitting close for Yuri. The response to the show was overwhelming and re-sparked the band to continue recording together, but to limit their usually extensive touring schedule. It also inspired a Life in General show for the home crowd in Seattle.

The film picks up here and chronicles the days (March 23-26, 2011) leading up to the Life in General show in Seattle held in March 2011. The film opens with Yuri discussing his difficult decision to walk away from MxPx and follows with singer/bassist, Mike Herrera, reminiscing over some classic MxPx merch, t-shirts, photos, and records at the band's office and storage space (which at one time was home to their original recording studio).

Throughout the footage of radio appearances, haircuts, tattoos, practice, and the final show at El CorazÓn, are constant flashbacks to 2008 as well as the band and press interviews discussed earlier in the review. There are a ton of great tidbits, interesting facts, and stories on display here. We find out why Tom is afraid of flying, what the band does for fun while on tour, and why their tour bus was nicknamed "The Black Pearl." Ever wonder about band fights while on tour? Who's the biggest instigator in the band, or which members fight the most? It's all here. Is Yuri actually a serial killer that takes out the homeless in the cities they tour? Why is Tom a Madden Football addict and a Back Lounge Gnome, or BLK (yes, "BLK") as described by Mike Herrera. Why can't Herrera spell (Really? Who spells gnome with a K?)? Well, that last question is not answered, but the rest are on top of a ton of other questions you may have about the band and touring.

Both Ends Burning is definitely the most intrusive and most informative look into the band fans have ever seen. On top of that, this is the highest quality and best shot film they have released. Though it seemed 2010 was a time of despair, 2011 closes with hope as the band will Celebrate the Past... Embrace the Future. If you are hoping to hear some new music on the project, you will be happy as the credits role at the end of the film. A new song, "Far Away," is featured at the end. The song proves the band still has a creative spark and is continuing to write solid music.

This documentary is a necessity for any fan of the band, or anyone looking to learn about MxPx. It's one of the better rock documentaries I've seen, but it is a little lacking when compared to something like the Foo Fighters' recent documentary, Back and Forth (but then again, when you look at their status as a band, I would expect no less; I mean they sold out Wembley... TWICE!). Regardless, this is a fantastic look into the lives of the band. There is no foul language, drinking, or other offensive material in this film, just as expected. The most offensive comment is a joke made about Yuri's walks on tour. Mike and Tom make as comments about the running joke that Yuri is out "scoring drugs," or that he is a serial killer that needs to "take out a hooker and a homeless person" to stay sane and not kill his band mates. The comments are made in jest and should not cause one to take offense.

Look for MxPx All-Stars (Mike Herrera, Kris Roe [The Ataris], and Chris Wilson [The Summer Obsession]), Tumbledown, and MxPx on tour soon. Though their schedule has been cut back, the trio still plans to hit the road for their 2012 album. As for touring itself, I'll leave you with this quote from Mike Herrera, "Touring is a young man's game. It's hard to sleep on floors, in the van, or not at all, but it's more life experience than most people get in ten years." Long live the Pokinatcha Punk...