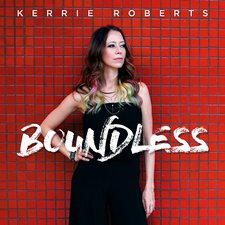 
Staying power is a tricky thing to achieve in the music industry no matter what genre, age, or gender of the artist, but possibly the most difficult arena in which to do so is that of a solo female Christian pop singer. What is it about an artist that makes them a Francesca Battistelli or a Kerrie Roberts, where one can become a leading figure in the industry, and the other becomes largely overlooked? It certainly isn't because Roberts' material hasn't been high-quality enough, as Robert's 2013 release Time For The Show was every bit as strong as Battistelli's 2014 hit If We're Honest, but in this fickle industry, sometimes cracks just form for an artist to fall through. Fortunately, Roberts has been able to keep up her craft in spite of bouncing between labels and independence. Now, nearly four years since her last album release, she is finally ready to throw her name back in the ring with her newest venture, Boundless.

Roberts has always maintained a strong sense of versatility in creating her material in the past, and while her genre carries a generally well-defined set of expectations for her target audience, she has been able to play to her personal strengths and avoid simply pandering to those expectations. However, it would be difficult for an outside observer to listen to the opening song of Boundless and think of much other than pandering. "Life In The Name" is a textbook CCM/vaguely-worship track with catchphrase-filled verses, repeating choruses, predictable dynamics, and even an elongated "Jeeee-eeee-eeee-eeee-sus." The real pity is that this song was chosen as the opening song of the whole project. If "Life In The Name" were to have been hidden somewhere in the middle or back of the tracklisting, it would have been harmless enough. But the statement that song sends to the listener as the first thing to hit their ears is that the album will not contain any surprises, depth, vulnerability, or real uniqueness (even if that statement isn't actually reflective of what the album offers, as is the case here).

The other big issue that plagues Boundless is one that was a total non-issue in Robert's previous albums, which is both the unmemorability and the lack of other upbeat pop numbers (of which there are only two: "Hold On To You" and "True North"). It is this flaw that undermines what is definitely the album's greatest strength; the songs where Roberts slows it down for more meditative, thoughtful, and decorative tracks. "Echo Of The Ages" is a beautiful piece of songwriting about the song of the angels being sung through all of time and eternity, the extended metaphor of "Rooted" is very effective, and in the midst of all the rhetorical questions of "The Answer" is an indelibly thought-provoking look at life in Christ. The album's strongest offerings of all are the two closing tracks, "Where My Heart Belongs" and "The Answer." And of course, it doesn't hurt to include one of the most beloved Christian songs in the English language with "Nothing But The Blood," which is given a great makeover here. In a way, it is ironic that limiting the album's weaker moments actually minimizes the strength of the stronger ones, but in that sense it is like a roller coaster with great turns and spins, but no steep hills to build momentum. So much on this album as a whole could have been set right simply by having stronger pop numbers (or honestly, even just more of them, as seven of the final eight songs downplay the hooks and tempo). However, on a song-by-song basis, Roberts shows she can be just as strong a songcrafter as she has ever been. I am sure that if a couple of her better songs here could be hypothetically added to either of her previous albums (which are two solid albums in their own right), they would have been the better for it.

Roberts on Boundless is more the victim of a few very noticeable errors than a lot of small ones that accumulate to the point of forgetfulness. In that sense, it is easier to recommend this album than most others with a similar rating. It has more good songs than possibly most other albums, and can find a great home on playlists of a great many CCM fans, but little great hope as a total project. Fans of mainstream CCM may be indiscriminate enough to enjoy the whole album, but most others would probably be most well-served with the individual highlights this record contains.