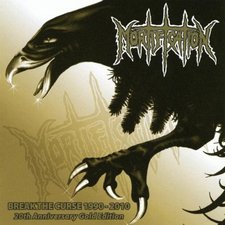 
First released in 1990 as a cassette-only demo to be shopped to labels, Break the Curse found the group, then known as Lightforce, in full-on thrash mode, having migrated from the late '80s power metal stylings of the first two Lightforce efforts - 1987's Battle Zone and 1988's Mystical Thieves - and not yet having plunged headlong into the decidedly death metal trappings that informed the landmark 1992 Scrolls of the Megilloth record.

All of the usual accoutrements of the thrash metal idiom are in full effect on the Curse project: growled vocals, copious signature changes, rapid-fire drumming, the lo-fi D.I.Y production aesthetic borrowed from thrash's New Wave of British Heavy Metal roots, and nary a ballad in sight. While none of this resulted in opening slots for, or sales figures on the order of, revered outfits like Metallica, Megadeth or Slayer, Curse and the 1991 self-titled follow-up were, and still are, hailed as absolutely shining examples of their particular musical wheelhouse, earning founder/front man Steve Rowe and his cohorts the rare respect of their peers in the mainstream metal community - an impressive and noteworthy achievement that only a handful of artists in the Christian camp can claim.

Having already been released in 1994 on the Nuclear Blast imprint (the band's label at the time), one might rightly wonder if the beefed-up twentieth-anniversary effort is worth the fuss. For true fans, the answer is a hearty affirmative. From the studio version of "Time Crusaders," which was previously only available on a rare 1994 Australian metal compilation, to 1987's "Eyes of Destruction" from the 1987 Lightforce debut, and the entirety of the lengthily-named 1996 Noah Sat Down and Listened to the Mortification Live E.P. While Having a Coffee extended player, the gold-edition re-release is a veritable treasure trove of musical treats for those who appreciate bracing, well-delivered metal music.

In fairness, the addition of the early tracks and live EP cause the 2010 rendition to pale a bit, in terms of cohesiveness, to the 1990 and 1994 renderings. And the exclusion of "Butchered Mutilation," which appeared on the '94 record, means that the 2010 incarnation falls just shy of comprehensive. All of that said, the inclusion of all of the songs on the original 1990 album, together with the abovementioned bonus cuts and a veritable bevy of additional enticements (rare photos, a band history by Steve Rowe, a live DVD of the group's first concert under the Mortification moniker), make this a more than worthwhile purchase for both diehard fans and Christian music historians alike.