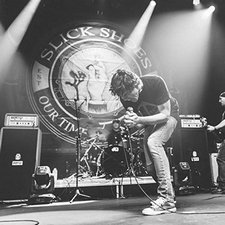 
In August 2018, a [relatively] newly reunited Slick Shoes headlined a show at House of Blues Anaheim. The show was recorded with the intention of independently releasing it as a live album. However, in 2019, fans of the band received some surprising news in that Slick Shoes had returned to their former home at Tooth & Nail Records. With a new studio album on the horizon, the band's return to T&N begins by finally releasing the live album, under the name Broadcasting Live.

Some of the best live albums feature not just the songs that were played, but the banter between the songs as well. It's what makes albums like Five Iron Frenzy's The End Is Here or John Mark McMillan's Live at the Knight extra special. Broadcasting Live's lengthy tracklist isn't completely void of between-song talking, but I was disappointed there was so little of it. And at 21 tracks that take just over an hour to listen to, it tends to get a bit tiresome near the end. But in all honesty, these are my only complaints (after all, they did leave in the "one more song" chant before their encore).

What's great about this album is that it's one of the best sounding live albums I've ever heard. The recording and production are essentially flawless, and the band sounds better than they ever have. Sometimes when a rock vocalist has such a unique voice as Ryan Kepke, the studio version of the voice is leagues above the live version. But Kepke sounds phenomenal here, and the musicians (which I believe are the Rusty-era lineup) don't miss a beat. This, of course, is crucial if you're going to make 95% of your live album just music -- even more so when you're playing hits like "Angel," "Alone," "East On Tracks," and "Now's the Time."

I could go on and on talking about how great it is that Tooth & Nail finally has a pop punk band again, or how exciting it is to think of the potential of more legacy bands like Slick Shoes coming back and releasing music with major labels again, but that's for another place and time. Slick Shoes is back, and Broadcasting Live is a solid live album. Now we just need to sit back and patiently wait for that new studio album in 2020.