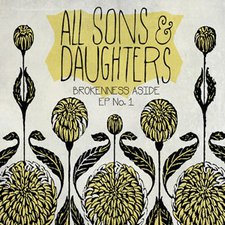 All Sons & Daughters
Brokenness Aside, EP No. 1

It's a common thing to mention the lack of creativity and originality in much of modern worship music. While it's easy to recreate sounds that have already made an impact in the church it's beyond refreshing to hear something, dare I say, new. With the debut EP release of newcomers All Sons and Daughters, we are given something beautiful, honest, and fresh. With a title like Brokenness Aside (Ep. No. 1) it may seem to be all positivity and no transparency... however what you find is a ton of confession and the discovery of life in brokenness.

The album opens with the raw track, "ALIVE." It is a beautiful introduction and creates an incredible backdrop for the rest of the album. Powerful is an understatement as AS&D proclaim without apologies that we cannot be disappointed with the grace that we've been given and in that grace we've been brought to life. That kind of blunt honesty is compelling and convicting to say the least. "Let It Shine" continues with that conviction as they push for us, the Church, to let the Lord shine in our lives, not just through us but also on us. "All the Poor and Powerless" opens with a sobering reverence for bringing our problems before the Lord. Lyrically, the song is a masterpiece as it involves not just the gifted holy-roller but also the decrepit believer who just needs to bring what they have to Jesus. Just past the halfway point of the song, it takes off with a choral declaration saying, "Shout it! Go on and scream it from the mountains! Go on and tell it to the masses! That He is God." It's simple and beautiful.

"Brokenness Aside" is a sweet, worshipful lament. That might sound like a contradiction but it's that confession of depravity and the revelation of God's grace that gives the song such depth. It's a worship song that fits in intimate and corporate settings because it strives for glorifying the Lord. This is followed by the appropriate "I Am Set Free." Where the previous song was more of a confession, this song walks in the forgiveness and freedom that comes with repentance. Both songs apart from each other are powerful, but back to back they have even more impact. The final track brings the EP to a soft landing with the mellow "Your Glory." AS&D doesn't try to leave with a bang but instead softly sings about the goodness of Jesus. Even though the song doesn't explode with energetic drums and a guitar solo, it ends with pure gentleness. Literally, it reminded me of Psalm 46:10, "Be still."

All Sons and Daughters has not just made another worship album to be put on the shelf of potential songs to do on a Sunday morning; these are songs for Monday mornings and Thursday afternoons. Worship leaders should look to do these songs in small groups, large groups, and even corporate settings. Like everything, they will not be everyone's cup of modern worship tea, but if you want something fresh, you need to get this album right away. If this is only EP number one... I hope there are many more to come.

Formerly known as just Sons & Daughters, the newly-signed Integrity Music duo All Sons & Daughters are showing the world what they're made of with their debut EP, Brokenness Aside. Though I'm usually hesitant about most bands signed with Integrity, these six songs show a bit of a brighter side to modern worship music. There are a few moments that sound like most other worship bands out now (like "All the Poor and Powerless"), but early on in the tracklist comes some really good indie and acoustic pop along the lines of something you may hear from Little & Ashley. "ALIVE" and "Let It Shine" are my two favorites of the bunch, being really simple songs that don't follow in the footsteps of the majority of what you hear in modern worship these days. "Brokenness Aside" is another highlight, with some more well-done indie pop, as they sing of how God makes all things beautiful despite our sinfulness. It's a very encouraging song for those who feel like they have nothing to give and those going through tough times. All Sons & Daughters brings a touch of their own style to "I Am Set Free," though it also heavily reminds me of a Hillsong ballad. The final song, "Your Glory," does lean more toward the creative side again, bearing a slight resemblance to The Ember Days, though it doesn't seem to be too memorable; it's good, but I don't know how often I'd come back to it. In the end, I am pretty impressed with the quality of this release. Integrity usually isn't known for their high-quality artists, but they may have found something special in All Sons & Daughters. Brokenness Aside is a good start for them, and I expect good things from their first full-length. - Scott Fryberger, 7/28/11