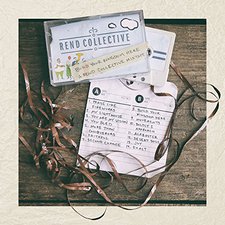 
A best-of album might come off as superfluous to a band's fans, but it does serve as a good entry point for anyone unfamiliar with a band's music and also acts as a review of a group's history. With Build Your Kingdom Here: A Rend Collective Mixtape, the popular folk/rock worship band from Ireland gets a 14-track retrospective of greatest hits from their first three studio albums: Organic Family Hymnal, Homemade Worship By Handmade People, and The Art of Celebration. As someone only vaguely familiar with their work, I was eager to go a little deeper into Rend Collective's catalogue and see if the hype surrounding them is deserved.

The flow of the tracklist is ordered well, featuring mostly upbeat tunes with a couple quiet songs thrown in at appropriate times. It's interesting to see how the band grew in style, with a smattering of pop-tinged fare popular among other worship artists (most notably, Hillsong) giving way to the folk/rock styling that set them apart. It's when they mix Mumford and Sons or The Lumineers with worship that Rend Collective is at their strongest. Songs like "My Lighthouse," "You Are My Vision," "Build Your Kingdom Here" and "More Than Conquerors" exemplify this. The music is bombastic and bold, which is fitting when they sing lines like, "We are defiant in Your Name."

While the songs that fit into more familiar worship band territory can work ("Praise Like Fireworks" or "Movements"), this is where Rend Collective tends to fall short. Songs like "Alabaster," "Exalt" and "Faithful," though good lyrically, aren't as catchy musically. Also, when listening to 14 songs like these in a row, you start to notice similarities in writing style and consider taking a break to listen to something else. The lyrics, though, are the saving grace throughout this collection, mixing creativity with refreshing honesty. The only questionable line comes in "You Bled" where they sing, "You left Your perfection." I assume this is in reference to heaven, but if they're saying Jesus wasn't perfect in life, that's a problem. Admittedly, this is more of a theological nitpick and doesn't detract from the other songs.

Since my first introduction to Rend Collective, the band has garnered a mild interest from me. Their sound attracted my ear and their lyrics seemed more creative than some of their counterparts. Being exposed to more of their songs on this Mixtape confirms my opinion of the group and deepens my interest. In this case, the best-of album model worked; I'll be keeping an eye on what Rend Collective does next.