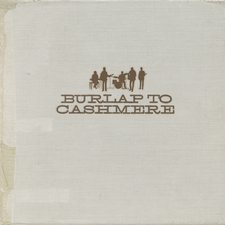 Recent projects from Living Sacrifice, Charmaine, Blindside and Falling Up are all perfect examples of one thing: comebacks. Sometimes in a given music year, it's the unexpected returns from these lost artists that are the biggest surprises. Likewise, folk rock band Burlap to Cashmere made waves in 1998 with the entirely unique Anybody Out There?, drawing favor from both Christian and secular markets, even winning a Dove Award in a process. Though the band's members grew apart since then, a tragic accident involving guitarist John Philippidis brought the core members of the band back together, and a new album resulted. And now Burlap to Cashmere is here, albeit thirteen years after their debut.

With popular folk outfits Fleet Foxes and Mumford & Sons making more and more fans all the time, the sound of Burlap to Cashmere has quite a bit of appeal across the board. As BTC's old fans would know, Greek-inspired melodies and instrumentation are the rule of thumb, though it's an appropriate progression from their debut without retreading their last album's sound. Vocalist/guitarist Steven Delopoulos has certainly kept up with this art well enough to compose eleven individual pieces of this sort of folk music, all of which have their own interesting aspects to stand out. "Build A Wall" is the most fast-paced song here, and though that could disappoint fans of the more aggressive nature of Anybody Out There?, one should not ignore the brilliant, though slower, feel of the rest of the project. "Don't Forget to Write," "Closer to the Edge," "Live in a Van" and "Santorini" are all expertly executed ballads, while "Hey Man" recounts the band's recent history without contempt ("Hey man, join our band/Open up your heart and let her expand/Sing to the world till they understand.../We are the love and the love is lightning/One land, one heart/Let's get together then break apart").

To some, Burlap to Cashmere was a little controversial back in the day due to their mixed spiritual background. While no one could doubt the Christ-inspired lyrics of Anybody Out There?, the band's members varied in their spiritual beliefs, and they still do. At first glance, it would be tempting to say the band was even less spiritually focused this time around, but the lyrics here, though less straightforward, still have obvious connections with Christ. "Tonight" describes the encounter of God's presence ("You came inside my home/To erase the brutal scars and memories alone/But tonight, tonight/You look so bright/And your smile returns a story/Yes tonight, tonight/Your eyes transcend the glory"), and "The Other Country" is none other than heaven ("Your eyes see the shining city/Your love heals the poisoned mind/When the journey ends/There's a new beginning/When the risen man/Heals the weight of time") and Delopoulos recounts his transformation through Jesus ("Even though I walk thru the valley of the shadow of death/Even though I sink through the ocean/You will rescue me/I am standing in the fire/but I can hear the choir singing/I was a blind man stumbling/But now I see"). The spirituality here may be more subtle than before, but it's still very much present, if not more poetically evident. Though it may take more listens than usual to pick out these themes, unfolding these layers slowly is a rewarding aspect of the album rather than a disadvantage.

To be sure, Burlap to Cashmere's genre is seldom heard in this industry, but it's all the more attention-grabbing for those who choose to hear it. Old BTC fans will no doubt be more than thrilled with this long-time-coming follow-up to Anybody Out There?, but anyone else looking for something different in the industry could be won over as well, especially for fans of the previously-mentioned folk rock powerhouses. Regardless of how many new fans are won over, however, Burlap to Cashmere is a solid return for the folk rock group that shouldn't be underestimated.

Burlap To Cashmere's self titled second offering aces every test of the sophomore album (a test taken however, thirteen years later). The project builds upon what made the first album (1998's Anybody Out There?) work so well - plentiful flamenco guitar styled Greek folk music combined with impassioned singing and playing - while adding just enough new twists to demonstrate growth (like the nifty yet evocative surf guitar in "Nehemiah (Build A Wall)" and the pan flute on "Orchestrated Love Song"). Not many bands that meld Mediterranean party music (the Greek-island-celebrating "Santorini") with songs of compelling personal testimony ("Seasons," "Closer To The Edge").

With echoes of great folk rock ancestors like Simon and Garfunkle, Van Morrison and Cat Stevens, Burlap To Cashmere brims both with classic song structures and insightful spiritual lyrics which point to the trials, joys and growth of the in-between years. You get the sense that Steven Delopoulos and company have been through the ringer yet can still testify in both the opening song "Don't Forget To Write" and the closing C.S. Lewis inspired "Other Country" that "I once was blind but now I see."