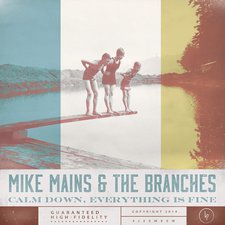 Mike Mains and the Branches
Calm Down, Everything Is Fine


You may not have heard of Mike Mains & the Branches, and that's okay. The Texas/Michigan indie band released their debut album, Home, in 2010, and they have quietly been making a name for themselves through persistent touring. However, after the release of their sophomore album, Calm Down, Everything Is Fine, awareness must be raised.

The four-year gap between their records certainly paid off, and the group has created an infectious sophomore album. Energy is the first thing you'll notice on Calm Down, Everything Is Fine, and they have a lot of it. From the building opener, "Played It Safe," to the final track's crescendo, the energy never lets up. There are enough quieter and slower tracks dispersed throughout the album to give it room to breathe, but most of what you'll hear is upbeat and rocking.

The band's songwriting has significantly stepped up from their debut album. The outstanding album closer/title track is proof of that. The song takes you through twists and turns on its five-minute musical journey before erupting into a joyous send-off for the album. Other highlights include the optimistic "Everything's Gonna Be Alright," the acoustic and pensive "Slow Down," and the pop gem "Take It All," which is begging to get radio play. There's hardly a dull moment to be found on the record. The only one I can find is the somber "Stones," which prods along at an uninteresting pace. However, the triumphant title track helps me forget any criticism I had for the prior song. I can't seem to say enough about "Calm Down, Everything Is Fine." Perhaps one of the only complaints on this album is that the songs pass too quickly and could stand to be a little longer. Inversely, one could argue that is what contributes to the great listenability of Calm Down, Everything Is Fine, so the jury is still out.

The three members of Mike Mains & the Branches surrounded themselves with excellent talent to record this album. Zac Farro, the founding drummer of Paramore and the man behind Half Noise, joined them in the studio to play drums, and he did a tremendous job. Relient K guitarist Matt Hoopes was recruited to produce the album and contribute occasional guitar lines that beautifully fill out the songs. The chemistry is magical, and just from listening, you might think they've been playing together for years.

What you need to know is this album is spectacular. There is a terrific balance of lively, hopeful songs joined with introspective, solemn-but-with-the-light-peaking-through-the-clouds moments. You may not have heard of Mike Mains & the Branches before, but now that you have, don't pass up this album. If you're still on the fence after all of this, I recommend you follow Mike's advice from "By My Side" and "put on that swimsuit, dive right in the water's warm."