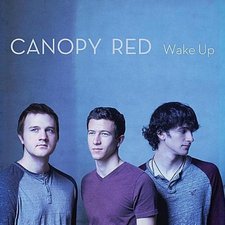 I find writing positive reviews are easy. It's easy for me to spot aspects that I love about a particular album and convey them in my critique. Likewise, writing negative reviews are fairly easy as well. Although it can be challenging to type out criticism with a degree of tact, it's easy to identify fundamental flaws and even easier to pick out the silver lining. However, I find that writing reviews for lukewarm albums are the hardest, because they often avoid huge errors but, at the same time, are unexceptional. Canopy Red's full-length debut, Wake Up, is the latest example.

The trio from Tallahassee, Florida serve a steady diet of good pop rock to the table, but, despite the band's strong mechanics, creativity isn't one of the album's strong spots. Although three of the first four songs (sans the worship ballad "Forever," which feels like it goes on for that long) sport that solid pop rock sound; it's slow and non-engaging. Most of the problem is that the verses set up for big refrains, but the choruses simply do not deliver strong crescendos. However, both "Paralyzed" and the title track spice up their respective upbeat, but serious refrains. The ballad "Won't Let Go" stands out thanks to the most emotional performance by the lead singer, Forrest Krazit. After that song, the album avoids mistakes, but sticks to cardboard cutout song structures which never yield any more than uninteresting tunes. After several listens to this average album, it's obvious that a little ingenuity would have gone a long way.

Wake Up also offers straightforward lyrics. They aren't shallow, but overall the songwriting doesn't boast of a vast vocabulary or clever rhymes. Much of the first half of the album is focused on doing more with our lives. "Wasting Time" encourages listeners to not blow the current opportunities before us, "Disguise" challenges us not to hide but to live and breathe our faith, and "Sink Or Swim" and "Paralyzed follow with similar themes. The title track reiterates a parallel message, but the lyrics "like your judge on your own trial/know your rank and file/remember to know that God is God/and we are not" are excellent.

The recurring theme on Wake Up is to not accept the status quo. Cleary, the American Church at large has failed horribly to engage the culture around us, and Canopy Red's message cannot be screamed loud enough. However, this album is so unexceptional that they could stand to take their own advice when it comes to their music and songwriting talents.