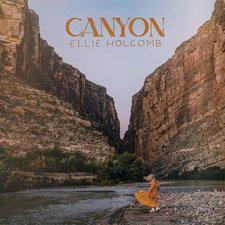 
After a four-plus-year wait, it's great to hear from Ellie Holcomb again. With Canyon, now her third solo outing, Holcomb makes a splash, rising to her highest heights thus far. Canyon is a record about a deeper sorrow and a higher hope," shares Ellie Holcomb. She continues, "We all know what it is for our hearts to be broken, split wide open by the pain and loss and sorrow we encounter here. We know brokenness. We know division, but there in the middle of all the chaos, in the places where the pain cuts a canyon into our very hearts, there is a river running through. There is a current of love that brings refreshment, hope, and comfort. There is a river of love there to carry us if we'll only let it.

For Canyon, Holcomb teamed with a plethora of acclaimed songwriters, with Natalie Hemby, Bear Rinehart of NEEDTOBREATHE, Jon Guerra, David Leonard, and Thad Cockrell among that count. The record was produced by Cason Cooley, who also features as co-writer on many of the tracks. He's worked with a who's-who of artists including, but not limited to, NEEDTOBREATHE, Drew Holcomb & the Neighbors, and Andrew Peterson. Additionally, Christian music legend - and her father - Brown Bannister also acted as executive producer on the project.

So---with a new producer in Cooley and a top-notch co-writing team in tow, do we get too many cooks in the kitchen or just the right recipe? Resoundingly, it's the latter. Canyon has a pinch of pop drums, a light gloss of modern production, heartfelt lyrics, and a sprinkling of career highlight songs in the mix, and ultimately it smacks of her best yet. This is no small feat with such a beautiful album as Red Sea Road preceding it in 2017. It's always a delight when an artist continues to get better with each subsequent release, and it's a joy to hear that this is so in Ellie's case.

Additional tracks of note are the vulnerable though hopeful Color, the sweet call to unity in Bridge, and the duets with Natalie Hemby and Bear Rineheart on Paradox and Sweet Ever After, respectively. Those tracks are currently in competition for overall favorites of the album, while several others are not far behind. This is, of course, the sign of a strong album, and Canyon is in the upper tier of the pop/Americana stylings that it employs. Lastly, of note are the two songs Mine and closer Constellations. Mine is a sweet duet aimed at her children with an assist from husband Drew as both sing reassuringly, You're mine/I'm not too busy, I'm not in a hurry/Slow down, just breathe/And lean right into me." It's one of the best parents-to-child songs of recent memory, coming off as just the right amount of tender and resolute. Finally, the album closes with Ellie digging deep into her vocal repertoire for some grit and a near vocal crack in the passionate "Constellations." Her earnest heart's-cry pleads and ultimately rests in hope with her final thought being, 'Cause out here in the dark/Underneath a canopy of stars/Constellations falling from Your heart/They tell me that I'm not alone/'Cause honestly, I'm so alone/But promise me I'm not alone, oh. It's a fitting close to a fine pop album that's shinier sounds only aid in showcasing the pain and earnestness of searching, rather than take away from it.

Holcomb is a singer/songwriter who has walked a tough and dry season of life, and yet remains hopeful---even joyful. Thats a choice, and just like your choice as a listener on whether to tune in to Canyon or not, we too can choose joy no matter where we are in life. Canyon is a top-notch set of songs and a worthy addition to your musical queue. If you need just a few to whet your appetite, then start with "I Don't Want to Miss It," "Paradox," and "Sweet Ever After."