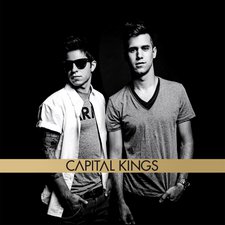 In the last several decades, computers have shrunk from gigantic machines that took up entire rooms to small gadgets that fit comfortably in a music listener's pocket. In this digital age, then, it only makes sense that electronic music has only become more prevalent because of how easy it is to "throw it together." Record producers have noticed, and more and more artists are jumping into the game with mixed results, the Christian music hub being no exception. With the influx of artists, of course, comes the need to make a real impact on the genre. Enter Capital Kings, a duo (comprised of singer Jon White and mixer Cole Walowac) that seeks to mix biblical truth with the life of the party.

The hazardous aspect to electronic music is that, to the uninformed listener, it can be difficult to distinguish between the talented and the unaccomplished in the genre. With a few exceptions that land crossover hits on the pop charts (such as Owl City, Skrillex, and Alex Clare, to name a few), artists in the electronic genre are mostly obscure to the majority of the listening public, and to the uninitiated, one artist's attempt can seem unique when it truly isn't. Though the Christian music industry isn't completely devoid of electronic music (as prominent aficionados like Andy Hunter, Code of Ethics, and Joy Electric have kept the market exposed to quality work in the genre), very few of these artists consciously attempt to appeal to the pop scene like Capital Kings; with this concept in mind, the duo treads somewhat safe ground when releasing appealing material. Capital Kings could garner quite a bit of attention based on their genre alone, which makes their duties all the more pressing to roll out solid material. Fortunately, their first full-length record is a good introduction to what White and Walowac are capable of.

Up to this point, Capital Kings have done an effective job of getting their name out in the market by expertly remixing tracks from big names like TobyMac, Brit Nicole, Mandisa, and Group 1 Crew, and their resulting catalog of work is impressive with only a few years in the game. Indeed, these guys know how to mix beats in pleasing, engaging ways, and their preview EP, I Feel So Alive, from last fall showcased the duo's abilities to write their own material apart from remixes. For their self-titled full-length debut, then, the ante has been raised. "All the Way," "I Feel So Alive," and "Tell Me" are all accomplished tracks in their own right, merging truth with electronic pop in a fun way, even if it's sometimes a little too simple to take completely seriously. At times, the duo struggles a bit in the lyrics; lines like "I'll be the GPS when you've lost your phone" ("You'll Never Be Alone") or "no worries like RG3/we're going all the way" ("All the Way") are harmless enough, but seem more goofy than is really admissible for a serious pop act. There's plenty to shore up for their future original songwriting, but it's more than a good start considering their genre.

The exceptional tracks of Capital Kings are the collaborations, with TobyMac ("We Belong As One"), Royal Tailor ("Living for the Other Side"), Britt Nicole ("Born To Love"), and Family Force 5's Soul Glow Activatur ("The Paradigm") all contributing on vocals to complement the beats. "Living for the Other Side" shows that Capital Kings and Royal Tailor are a true match made in heaven with the funk and electronic pop converging with ease; Tauren Wells' makes a great showing here, even if some of his forced rhymes and wit don't quite work all the way through ("Some say we're kinda crazy/I think I'd have to agree/but that's the only way I'll wanna be"). The far-and-way best track on the record, however, is the house-influenced "The Paradigm," a truly skillful composition that Soul Glow's vocals really accentuate. It's a little different than anything else on the album in its scale and its focus on the music rather than the vocals (listeners aren't likely to hear this one on Christian radio anytime soon), but Capital Kings saved their best for last, and they would do well to focus on his sub-genre of electronic music for albums in the future.

With DreamLab and Ryan Stevenson making less-than-impressive attempts in recent years, it's refreshing to have a debut electronic pop project that showcases some practiced talent from the get-go. While often struggling to pair up impressive beats with introspective songwriting, Capital Kings can reconcile these differences and nail down their varied approach and truly succeed in this genre. For now, the boys of Capital Kings have a very bright future ahead of them as long as they continue to refine their craft, and they are early new artists that are truly worth getting excited about.