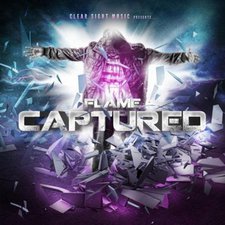 Over the span of four albums and nearly a decade of recognition in the Christian music industry's rap scene, Flame is finally back with his highly-anticipated fifth studio album in 2010. His last album, Our World: Redeemed, was a very strong release, making it safe to say that good things are expected of him. Having left Cross Movement Records to start his own label, Clear Sight Music, he's used the label to release his newest record, Captured.

Flame's last album, Our World: Redeemed, was a fantastic rap album that I enjoyed from start to finish. Critically speaking, it had very few weak points. On Captured, there seems to be some more obvious weaknesses. It's understandable, now that he's self-releasing his own material, however, it's not all bad by any means. There are plenty of positive aspects.

The first half of Captured is the stronger half of the record. It has some of the harder stuff that Flame excels at, although it does seem to be a bit tamer than previous Flame material. "Nonsense" has a nice, thick boom bap with a style of music that could almost be considered club rap. "Alive," the track that follows, is more street savvy with a heavier beat. It's a lot more dirty south than "Nonsense," though they're both great to nod your head to. In the second half of the record, you can also find solid music in "Put On." It has a nice combination of authentic rap music with a snare that snaps just right. The album closer has some pretty good music, too, that includes some synth and a piano to give it a more contemplative sound.

Flame is a gifted rapper, so tight flows abound in the heavier tracks, and in the slower ones, he provides some softer vocals but still maintains a pretty good rhyme scheme and rhythm. My two favorite tracks on Captured are actually both amongst the softer tracks. The first comes near the beginning of the album, in the song "Surrender." A guest appearance by a woman who goes by the name V.Rose provides a gorgeous hook that declares her surrender ("I'm never gonna run away, away from You, I open up my heart to You, I'm Yours, I'm holding up my flag and I surrender"). The music is along the lines of a more upbeat style R&B, with some dirty south high hat action, but the verses also contain some beautifully played guitar work. The other stellar track is halfway through s. Along with Chris Lee providing a smooth, R&B-flavored hook, "All I Need" takes time to remember God's goodness and provision. It's a pretty chill five minutes, but it's got a great sound that complements the message. I like "Surrender" more, but these two tracks stand out as the strongest of the album.

One of the things I find interesting (in a good way) about this latest offering is that the usual emcees we associate with Flame (like Lecrae, Tedashii, etc.) are nowhere to be found. Cross Movement artist J.R. does make an appearance, as does Thi'sl, but V.Rose and Chris Lee are the only other artists that take a guest spot on this album (unless you count the pre-order exclusive track "All the Way," which does feature a verse from Lecrae). It's cool that Flame is giving a couple smaller-name artists some recognition. It's also cool how much more personal Flame gets about his own life in several of these songs. In "Nonsense," he speaks of worldly things like drugs and the denial of God and how he used to be involved in it too. In "Alive," he even goes into stories from his past, before and after salvation. He talks about his fear of death and Hell before he met Christ, and then tells a story about getting mugged (apparently within the last couple years, as he mentions being married), but having no fear because "Jesus snatched me out of death" when he gave his life up to Him in 1999. Flame goes even deeper in "All I Need." As the most personal song on all of Captured, he raps about how he came to Jesus, and how he saw God pursuing him through the love of his parents when he was a foolish, rebellious teenager, as well as through his wife's love around the time they were getting married. His thankfulness to God and his family is heartwarming, and he brings a good reminder that God can use anyone and any situation to reach people that need to be shown love.

When it comes to weaknesses, you'll find a few spread out over the twelve tracks. Some of them are relatively minor, like the chopped & screwed repetition of the word "power" in the track of the same name, or using a whole track - "Daniel 10" - devoted to a clip from a sermon by Ryan Fullerton (don't get it wrong, what he has to say in the clip is great, I just don't know if I fully understand its relevance at that particular point of the album). There's also some weak music in "Move" (it sounds really old school, but not the good kind of old school), an overall weak track in "Captured Me," and way too much usage of autotuner. But what stands out to me as the biggest negative aspect of Captured is the musical inspiration. Flame has stated in interviews before that a lot of the music he makes is created based on what's hot at the time. Of course, that's what most artists do - create music in already pre-existent genres. However, there's a difference between creating music that you like and creating music just because it's popular. Flame has a great message and he reaches lots of people with the Gospel, and there's no denying the fact that he's been blessed with incredible talent. But it's really hard to fully enjoy music that's made only to sound like what's popular. I really believe that Captured would've been a much stronger album had Flame focused on doing his own thing instead of everyone else's (the closing track "Tonight (All of Me)" really brings to mind not only one of Matisyahu's newer songs, but more so the very popular "Young Forever" from Jay-Z's highly-respected The Blueprint 3). It also doesn't help that a lot of what's popular now is club rap, which is well-known for pumping out hit after hit, but not necessarily quality jams.

Flame is one of the top rap artists within the Christian hip hop market. As long as he puts out music, he'll probably stay up there too. There are several gems found on Captured, but overall, it's not anywhere near as good as we all know his music can be. In addition to all the weak points I mentioned, I think part of what makes this album pretty underwhelming is the anticipation I had before I heard it. Our World: Redeemed was such a good album, and from his self-titled debut till his most recent, he kept getting better. It was difficult not to be expecting another mind-blowing collection of tracks, and sadly those expectations just weren't met. Altogether, Flame brings a fantastic message that God will definitely use to bless the listeners, so I applaud that. But when it comes to the music that fuels Captured, the album just can't hold a candle to Flame's previous work.