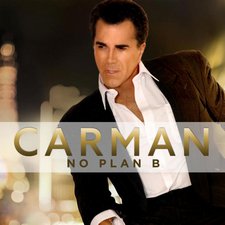 Carman
No Plan B

In the 80's and 90's, one could hardly have been a Pentecostal who listened to music without knowing Carman. The fiery Italian-American evangelist/singer, even in spite of his inactivity over the past decade, can lay claim to 15 gold or platinum albums, over 10 million album sales, and the record for largest Christian concert ever (80,000 people!). Famous for his musical eclecticism, including "story-songs," "sermon songs," kids albums, and assorting a wide variety of different sounds (including in the same song), it would hardly be an overstatement that he was probably one of the most unique acts in Christian music at that time period. At the same time, almost contradictory, he was notorious (especially outside of the Christian circles he was popular in) for his tendency to use almost every possible musical cliché that was popular at the time. Indeed, Carman was an evangelist first and a musician second in every sense of the phrase. As the turn of the century passed, Carman subsequently faded more and more into the background of Christian music, having not released a studio album since 2007. But last year, Carman received a diagnosis for myeloma, and the then-57 year old was given only thee-to-four years to live. Rather than take the diagnosis sitting down, Carman set out to make as loud an exit as possible, turning to Kickstarter for his biggest musical venture in over 15 years. With an absurd goal of $200,000, Carman easily surpassed it by earning over half a million, making it (at the time) the second-most successful musical project in Kickstarter's history. This brings us to No Plan B, the result of that Kickstarter campaign.

No Plan B may not exactly be the type of album one imagines is the product of such a massive Kickstarter success, but it is without a doubt the type of album one imagines was made by Carman. As he promised, all his trademarks are there; funky 90's pop with a dash of gospel and some worship, impassioned sermon-songs, playful exploitations of his Italian heritage, a fervent evangelistic attitude, patriotism, and (of course) all the Christian music clichés that he made extensive use of at his peak. It is safe to say that Carman's music today sounds just as good as it ever did.

All that said, this album really is a blast from the past. The synth-heavy 90's production, 90's style praise-and-worship like "Time To PTL" or "It's All In His Hands" (distinct from the dominant "modern worship" of today), 90's funk like "Yes Yes," 90's piano ballads like "I'm Coming Home" and "Jesus Heal Me," and 90's choirs on pretty much every song make No Plan B feel like the product of 1994 more than 2014. In that sense, one of the biggest flaws may just be that the sound was literally outdated before it was ever released. On the other hand, in my repeated listens to the album, that aspect definitely grew on me; call it nostalgia if you will (even though I'm rather on the young side to be nostalgic for Carman's music), but while it can be rightfully said the sound is outdated, it can also be rightfully said that they surely don't make albums like this anymore.

Lyrically, Carman leaves no doubt as to the passion of his devotion to God, even if some of his lyrical choices are over-the-top ("I walked away from Krishna / Kaballa had me bored / Buddah's not my cup of tea / Muhammad's not my lord" from the title track). Carman also makes clear his devotion to America with the song's pledge-based finale "The Flag" ("This flag sends a message to friend and foe alike that America is still the greatest land of all we're Americans, and there's nothing we can't do"). "God Made Man" is Carman's token nod towards his Italian heritage in the form of one of his famous "story songs," and brings the album to a level of cheesiness that borders on the campy. "Jesus Heal Me" is without a doubt an emotional high point of the album, and reminds the listeners not only of his illness and the purpose for making the record, but his trust in God that he does have the power to heal him (and "It's All In His Hands" follows up on the same theme, as does "I Did My Best").

No Plan B is undoubtedly a charming and nostalgic record, but unfortunately, its charm and nostalgia is founded in a sound that is in the past for a reason. If one wanted to listen to a Carman record from the 90's, then they might as well listen to The Standard, Addicted to Jesus, or even R.I.O.T. I'll resist the temptation to say this record was unnecessary, however, because clearly Carman felt it was necessary given his diagnosis, and he pulled out all the stops to make an album his fans will enjoy. If you genuinely like Carman, and don't mind the album's past tendencies, No Plan B is for you. Otherwise, its probably a pass.

Carman has always been unique in the music world. No one sounds like him, no one writes songs like him, and no one delivers spoken stories in song like him. So much so that I wish we could just call this album's genre "Carman"--not pop, not adult contemporary, just "Carman." Therein lies the problem with No Plan B. Any of these tracks could have appeared on previous Carman albums, like Revival in the Land, Addicted to Jesus, or The Standard. Why is that a concern? Well, those albums are all more than twenty years old. The new Carman album features 80's style female background vocals, synthesized instrumentation, dramatic piano ballads and "praise" tracks straight out of 1992. Still, no one can deny that Carman puts his heart and soul into this recording. Songs like "Heal Me Jesus" and "I'm Coming Home" are sincere for sure. And it wouldn't be a Carman album without a comedic "story song;" we get just that in "God Made Man." It could not have been an easy task to put out a new album in the midst of his Cancer diagnosis and treatment, and Carman's distinct vocals sound as good as ever. For big time Carman fans, and I know you are out there, this might just be what you are hoping for. - Review date: 5/20/14, Matthew Morris