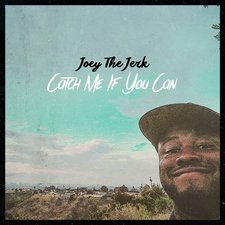 Joey the Jerk
Catch Me If You Can


Long-running member of the hip hop supergroup L.A. Symphony, Joey the Jerk is also an excellent solo artist, though his discography is relatively small for his tenure. After his solo debut, Average Joe, in 2003, it was a full eight years before he released his sophomore release, which was a pop rock album and had little to no hip hop influence whatsoever. So after Mold Me (which was released under the pseudonym Joey's Dream), what direction does Joey take? The answer is a new hip hop album by the name of Catch Me If You Can, which Joey the Jerk is releasing for free download through Noisetrade and Bandcamp.

If you heard Mold Me and thought that Joey's hip hop days were long behind him, you'll be surprised when you catch a listen to Catch Me If You Can. Not only is he still in the rap game, but he's still capable of hanging with the best. After a silly intro, he gets things started off with a tight track called "King Without A Crown," which features production from DJ Maj in addition to the main producers, fellow L.A. Symphony members Cookbook and Flynn (side note: part of me thought this could very possibly be a cover of the Matisyahu song of the same name, which I would've been perfectly fine with). "La Rocka" keeps the momentum and solid rhymes coming, as Joey says "Mainstream, Christian, subtraction, addition, the attraction is missing, if it's whack then I don't listen, I was blessed with a gift when I started to rhyme, it's like LeBron with a ball when I wrote my first rhyme." What I particularly love about Catch Me If You Can is that, not only are Joey's raps sounding better than ever, he also displays versatility and great adaptability when the style of beats change, which they do through the course of the album. Of course, with Cookbook and Flynn producing, it's an L.A. Symphony album through and through; "Nonstop" and "Winning the War" have a heavy Pigeon John influence, but "Chase the Day" brings a healthy dose of "street" hip hop beats, and "Jesus My Lord" sounds like something out of the 116 Clique camp.

In addition to the producers, Joey has also enlisted a small, yet elite, group of emcees to join him on the microphone. As if Joey's raps alone weren't good enough, he had to bring in Humble Beast artist and Tunnel Rat Propaganda for "Don't Be Afraid." In Prop's signature poetry rap style, he steals the second verse: "Mortal man foolish, trying to number the stars, with a brain he still can't explain" to "Walk around town like the solid rock I stand on, made from the same solid Rock I place my faith in," he always brings something to challenge your intellect. Later, in "Winning the War," Joey and Playdough share verses with a fun beat and rhyme scheme, with Playdough's signature quick-witted humor and lots of pop culture references. Some may particularly enjoy some of the second verse, when Playdough says, "Skeeter Valentine, back to the Dougie, Patty Mayonnaise slow dance with Doug Funnie, diddy diddy dum the devil runs when Jesus walks, I'm Michael Tait, you Kevin Max, we dcTalk." Last but not least, hip hop veteran and former Uprok Records artist Soup the Chemist joins Joey in one of the album's highlights, "MacBook of Raps." Featuring cuts from inDJnous, Soup's deep, Notorious B.I.G.-esque raps hit hard and heavy. As a relatively inactive artist these days, Soup can still kill a verse like nobody's business.

Now, while the majority of the album features topnotch hip hop, Joey the Jerk does still pull a little influence from his Joey's Dream material for a few songs. "Piece of Your Yesterday" is the first on the tracklist, featuring a melody and musical direction similar to that of "I'll Be There" by Mariah Carey. This track is still a semi-hip hop song, as Joey does rap the verses, but it's a lot more toned down and a lot more musical, with piano and a string section leading the way. "You Are Not Alone" is an inspirational song, again with rapped verses, while feeling more like something you might hear from TobyMac. With lyrics like "I'm praying God's love shines to you, and all you say and all you do, that God is speaking loud and clear saying 'I love and I'm always here'," and a chorus that says "I know you feel you're on your own...sometimes you feel like you're not strong...I know these days and nights get long...one day you'll right what's been made wrong, you are not alone, you are not alone," the song could fit quite nicely on K-Love if the DJ that day was feeling a little edgy. "Gone" is the last pop song on Catch Me If You Can, as Joey sings a few heart-wreching stories about the pressure the world puts on us and what it can do to our innocence. An "all-American" good girl who gave in to the pressures of sex and a young man struggling with false ideas of manliness start off the song, but it ends with a man filled with anger and depression who finds mercy and grace in the arms of Jesus. It's a good reminder that there are people all around us struggling with things only God knows, and it's our responsibility as vessels of God to show love and kindness.

It wouldn't be a stretch to say that Catch Me If You Can was a bit of a surprise; Joey had been relatively silent after releasing Mold Me four years ago, and his "active/inactive" status was unclear. It turned out to be a real treat, though, as it's one of the best Christian hip hop albums I've heard this year. If you're not so sure about that, there are a handful of songs that might win you over. "Chase the Day," "Nonstop," "Winning the War" and "MacBook of Raps" are all great recommendations, the whole album is excellent from start to finish. And you can get it for free on Noisetrade and his Bandcamp page, so no excuses. Pick up a copy if you like quality hip hop.