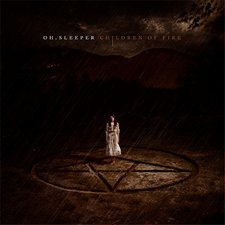 Oh, Sleeper has quietly become one of the forerunners in the Solid State lineup, garnering critical attention to rival some of the label's older veterans. This is due in large part to the band's exceptional sophomore release, Son of the Morning. It therefore goes without saying that expectations have been very high for their newest release, Children of Fire, and the band has delivered in spades.

As a whole, Children of Fire is darker and heavier than Son of the Morning. There is somewhat less focus on meandering guitar melodies underlying the tracks and more emphasis on down-tuned crunch than in Son of the Morning. The sound is thicker and more layered, with a stronger focus on percussive climaxes and a few more breakdowns. However, if this sounds like a band moving towards more metalcore clichés, fear not. The breakdowns are always precisely timed and never excessive, and there are an abundance of other elements that have been added to the mix to keep things interesting. Lead guitarist Shane Blay still gets in a good amount of technical noodling, for example on "Claws of a God" and "Chewing the Stitch." This combines effectively with some lighter sensitivities like a noticeably Thrice-esque keyboard line on "The Family Ruin" and a dash of acoustic guitar in "The Conscience Speaks" and "Means to Believe." Also, the rhythm manages to move along at a brisk pace, never getting bogged down in the slow chugs that afflict many bands.

Every Oh, Sleeper album to date has featured a tradeoff between Micah Kinard's harsh vocals and Blay's cleans, and Children of Fire features this dynamic at its very best. Kinard is still at the peak of his game, and while the album is less vocal-centric than Son of the Morning, he still shines through quite clearly. In fact, if Kinard isn't the most convincingly angry/heartbreaking vocalist in Christian metal, he's at least right up at the top. Breaking from previous albums, there is much less of the tried and true (but increasingly cliché) metalcore format of harsh verse - triumphant clean chorus. Instead, there are standout tracks like "Means to Believe" and "The Family Ruin" that focus in much greater detail on the melodic cleans, and others like the opening "Endseekers" that give Kinard's screams free reign in the chorus, relegating the clean vocals to the bridge.

Thematically, Children of Fire picks up where Son of the Morning left off. Son of the Morning ended with Satan's defeat, and Children of Fire opens in the aftermath of the battle. To the world, it appears that both God and Satan are dead, and mankind descends into decadence and evil. The story follows two characters, one of whom is a religious terrorist of sorts, and the other is his unbelieving daughter. Both characters experience a crisis of faith as the album progresses, followed by encounters with God that lead to the dramatic conclusion of the title track. As a result of this storyline, the lyrics in many of the songs are rather violent. Of particular note is "Hush Yael," a song referencing a real-life terrorist attack on an Israeli family in 1979, and the one track that most effectively demonstrates all of the band's abilities. Combined with Kinard's unflagging vocal aggression, the story is extremely poignant.

In the coming years there may be many debates among Oh, Sleeper fans about which of the band's albums is their finest work. Son of the Morning certainly hit many listeners hard in a big way, and Children of Fire will do no less. This reviewer will gladly partake in those discussions, because Children of Fire is an exceptionally crafted metal onslaught that features nearly every element that makes a Christian metal album wonderful. It may be the best album Oh, Sleeper has released to date, and it very well may be the metal album of the year.

Releasing their first album since 2009, Oh, Sleeper unleashes Children of Fire, which picks up where Son of the Morning left off in the aftermath of the fight between God and Satan. With the battle ending, both figures seem to have disappeared, throwing the world into an even greater state of chaos. The album's second track, "Shed Your Soul," speaks to this clearly when it states that "there is no right or wrong. No king, no throne to defend because we are all that exists. No blessing god. No judge or law. There's no cost or calls from the top because we're all on our own." It has become almost a trademark of the band to touch on subjects that others tend to shy away from. Children of Fire does not disappoint. As it follows the life of a disgruntled priest and his atheist daughter through a journey of faith and discovery, it vividly describes a world without God. Betrayal, self-doubt and murder are only the beginning of what the worst could lead to, and perhaps the best of it. The fourth track, "Hush Yael," which describes a real-life act of terror, is perhaps one of the most powerful songs on the album because it touches on the evil already present in our lives. Musically, Children of Fire showcases Oh, Sleeper's talent better than ever. The subtle key changes, the dynamics, the intricate guitar work, the pounding drums, coupled with some of the most challenging lyrics ever to be released makes this album not only Oh, Sleeper's best, but one of the most complete albums. Ever. Children of Fire is nothing short of a masterpiece. - Review date: 9/26/11, written by John "Flip" Choquette of Jesusfreakhideout.com