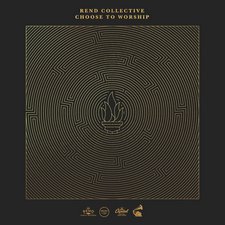 
Rend Collective, that peppy Irish band with energy to spare, has always added an infectious level of authenticity to the modern worship scene. In a time when new praise and worship songs may elicit a cynical eye roll from many, Rend Collective has consistently shown themselves to be 100% honest and sincere in their desire to sing new songs long and loud to their Creator.

Ironically, a few months ago, the title of their newest batch of tunes, Choose To Worship would have drawn out a ho-hum response by many. But in the current troubles of our world, the title can serve to remind the listener that the word "worship" is both a noun and a verb. Worship is a direct choice that is made, regardless of the circumstances of the current moment. It may be an old cliche that "worship is a lifestyle," but Rend Collective do their best on this album to breathe life into a concept that is as old as the book of Psalms.

Kicking off with the title track, chief lyricists Chris Llewellyn and Gareth Gilkeson state their thesis loud and clear in a folksy, quieter number that offers a soft intro to the album, "I choose to worship / I choose to bow / Though there's pain in the offering I lay it down / Here in the conflict when doubt surrounds / Though my soul is unravelling / I choose You now." These are strong words, and with a track record like Rend's, they come off as a needed reminder that the world will turn upsidedown for every person (sometimes for everyone all at once), but that the Lord never promised escape from the storms of life, but for His presence in the midst of the storms.

But it doesn't take long for the band to amp up the energy to an Irish, folk-rock "eleven." "Revival Anthem" rings out like a roar, with stomping rhythms, Irish fiddles and a battle-cry chorus that would fit in at sporting events as a raucous crowd sing-along.

"Day Of Victory" and "Behold He Comes" return to familiar, bouncy Rend Collective style, while "Sing From The Shackles" features a new dimension from the band. With a spooky, southern gothic flair (including some eerie chain link percussion to envoke the feeling of slavery), the song is a creative force in reminding the Christian that believers in every age sang praises in all sorts of circumstances. "Your Name Is Power" is a likewise powerful melody that encourages calling out to Jesus in times of trouble.

Only a few, odd "slow-jam" numbers in the middle of the album detract from the encouraging tempo and feel of the album. "Still" and "Unconditional" find the band slowing down the tempos too much, and experimenting with a disjointed R&B tempo that is an ill-fit for the band.

But pound for pound, dollar for dollar, Choose To Worship is a much-needed reminder of what the core of faith is, and that "worship" (like the word "love") is more than a thing, it is an action word and a choice we make, no matter the weather or circumstances outside our doors.