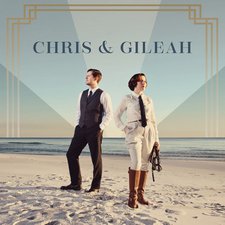 Be it hit or miss, self-titled debuts are prone to swinging hard. In the case of Chris & Gileah, the target is found with ease. This shouldn't be a surprise, however, as both artists delved into the world of songwriting, recording, and performing long ago (Chris Taylor is most notable for his BEC Recordings release Take Me Anywhere in 2008). Their significant experience within the music industry provides a touch of professionalism, usually left wanting in the context of debut projects.

Chris & Gileah open the album with "The Gathered Storm," a song that fades into a melancholic atmosphere with its acoustic sound and haunting melody. The track (and album, to a certain degree) is quite reminiscent of the genre in which Eisley has come to define over the past decade. However, this is not to say that Chris & Gileah have failed to set themselves apart. The very nature of their duets construct an enticing and original sound. "Map in my Heart" follows in the footsteps of the opener, but with a fuller tone.

"Love on this Island" is one of the best tracks of the album. The duo's vocals complement each other amid a complex melody and catchy lyrics. "Stay Love" is the first song that significantly deviates from the acoustic sound that has defined the album until this point. They use the instrumentation to their advantage, creating a bright sound, something needed at this point. The honest lyrics only add to the song, "and they don't know that we fall behind the scenes 'cause nothing's ever perfect but we know what it means, to stay when day looks like night, to stay to stay to love again."

"Miracles" is another exceptional song, boasting flawless harmonies and musicianship. Lyrics such as "the sun rises on me as it sets on you; I am across the world, praying for you" cut through the song with a crisp and clean ambiance. The closing track, "Midnight (Auld Lang Syne)," (adapted from the poem by Robert Burns) is good, but probably would be better replaced with "Miracles."

Ultimately, the album uses much moderation and feels very balanced and relaxed. The old-timey atmosphere and vocals create a subtle world of ataraxia, drawing the listener in with ease. Chris & Gileah's only real flaw is in failing to vary itself effectively, which could lead to the album being less memorable. The tracks flow together with ease, but don't separate themselves enough to stand out. Regardless, the craftsmanship shines through. Without a doubt, Chris & Gileah have composed one of the best albums of the year thus far, and you don't want to pass this one up.