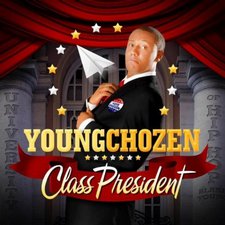 Young Chozen's debut showcases album art of a young man in a suit, a flying paper airplane, and the title Class President. Judging a book by its cover, this is not exactly what I'm looking for when I'm seeking out some new hip hop. The 25-year-old rapper hailing from LA, California is eager to reach a younger generation through his music, and that's exactly the impression that he delivers.

The album opens with the title track and the listener gets tuned right in, setting the stage for what will follow: over an hour of some very creative beats with lyrical content that is fun and positively Christ-driven. This track includes the ringing of school bells in the background, and album continues this trend with very unique production--especially in the songs "Tell It All Around," where the beats have some industrial flare, and "Think You Know Me," where the beats rival techno dance club songs. The amazing beats hit their pinnacle in "Here I Come" and "31 Status." On top of the fresh music, the songs are filled with hot lyrics like "I'm the new fresh prince and I'm living for the One" and a picture of the ideal woman in a song based on Proverbs 31. The message for today's college age group and below is permeated with positivity and focuses on the eternal. Other top songs would be "Head Noddin," where Young Chozen goes off about his new lifestyle, creatively spitting "the old me is dead, see him laying in the chalk" and "Way Up There" brings in some overly high-pitched chorus vocals. Most will either love or hate them, but I think they blend perfectly.

Despite the list of strengths, not all is perfect here. The album art is a giveaway for some corniness contained within. "Drive Thru" was released as a party anthem, but is filled with too many fast food references to be taken seriously. The track "La La La Love" has a few too many "la la la's," and "Set Em Up" has too many "get spiffy" lines, while "Pot Of Gold" is just a lame listen, although the message is good. As can be expected, there are a couple of "skits" and they're actually okay. They convey the message of God being more important than anything in this world and this message comes back full circle in the end.

All in all, it will be tough to love for those already past their twenties, but Class President is definitely a solid release for today's younger hip hop fans. It's not perfect, has some flaws, but the beats can be enjoyed by anyone. I would recommend Young Chozen's debut to anyone looking for some Christ-focused hip hop.