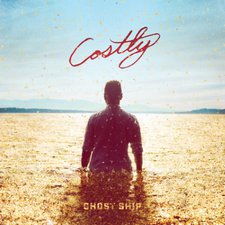 
Over the course of 5 years, folk music has increasingly infected pop radio. However, many of the bands producing these sounds are only mirror images of groups like Mumford & Sons and The Lumineers. In 2011, listeners were introduced to the neo-folk worshipful styles of Ghost Ship, and after an EP and one full-length project, it feels that the band has successfully developed their own unique sound with their latest album, Costly.

The album opens with the welcoming "Invitation." The music is bright and cheery without being condescending. Thankfully, this same sentiment is scattered throughout the album on such songs as "Adoption," "The Way" and "You Loved Us First." Furthermore, all of these songs are easy to adapt to a church gathering setting, and it not sound like everything else. Worship leaders looking for something a little weightier will find it on tracks such as "Look What God Has Done" and "The Revelation of Jesus Christ." While they aren't somber by any stretch of the imagination, they seem to have a more reverent sound.

The true highlight of the album is actually a pair of songs: "Peace" and "Provide." The former track is a beautiful prayer that pleads for the hope of Christ, as lead singer Cam Huxford sings, "Peace, you allude me in my days and dreams and without you I am wandering. I need you right now more than ever." It's a melancholy yet honest picture of the Christian life and the necessity of finding our hope in Christ. The latter of the two tracks is once again a prayer--yet in a confessional way--asking for the Lord's provision. It's incredibly ponderous while at the same time hopeful. Furthermore, regarding these two songs, the music is captivating. It's not overly complicated or complex; it's just smooth music with authentic lyrics.

The album concludes with the ethereal "Hesed." This is without a doubt the most thoughtful track on the album. It's musically full and is almost treated as a selah of sorts as it leaves listeners to meditate on God's lovingkindness. While it's not as upbeat as the preceding songs, it closes the album on a very considerate note.

Overall, Costly is one of the albums that 2015 needs to bring it out of its musical slump. The instrumentation is rich, the lyrics doctrinally and introspectively deep, and the production is fantastic. This is definitely a great album to start the Fall season off on the right foot. Plus, if this is the beginning of a new "season" for Ghost Ship, the future looks very bright.

As probably can easily be expected, with the transfer to BEC Recordings, Ghost Ship has seen a dramatic increase in production polish on their latest album, Costly, compared to their raw, hollow-sounding debut The Good King (one of the aspects of that album that stood out most). In fact, the album sounds almost indistinguishable from the majority of worship and contemporary projects out there from a production standpoint... except for the fact that the music itself is so much better. As with most former Mars Hill artists, one of the defining features of Ghost Ship's style is quality, theological, meaningful lyrics, and Costly has more than enough of that. Take for example "Heavy as the Sea," which is a song that simply states metaphor after metaphor of God's love and greatness, then says "Comparison fails in describing the sweeping majesty held in your hands." "Poverty and Riches" is another lyrical favorite, as it takes the common God-is-all-I-need theme and gives it the new life ("Give me neither poverty nor riches/Give me just the sustenance I need/Lest I become rich, I would forget you/Lest I become poor, then I would steal"). Other lyrical highlights abound, but are too numerous to list here. Meanwhile, the beautifully polished production, while it tones down the band's folk-ish, Americana roots, enhances the album's overall effect; I can't think of another Christian market band that has attempted this type of sound and has pulled it off so well. "Hesed," "The Revelation of Jesus" and "Invitation" (a radio friendly song I would have absolutely no issue with becoming a hit) are just a few of the impressive pieces of work Ghost Ship has here. I do, however, care a bit less for some tracks which probably could have been trimmed from Costly's hour-plus run time; "When I Survey..." is the prime culprit here as a mostly-unimpressive hymn rewrite, "Look What God Has Done" is relatively pedestrian both lyrically and musically, and "Fear And Love" sounds too similar to other songs on the album. Nevertheless, Costly is without a doubt in the upper echelon of worship albums that have been released in 2015, and is destined for many repeat listens. - Review date: 8/28/15, written by Mark Rice of Jesusfreakhideout.com

When BEC Recordings released their Mars Hill Worship Sampler in 2013, one of the bands I was most looking forward to was Ghost Ship. They inevitably released their BEC debut that summer, and The Good King impressed listeners, but it didn't really catch my attention. Two years later, however, Ghost Ship is at it again with their sophomore album, Costly, and the band has found a rather soft spot in my heart. Mars Hill's collective unit of artists covered a fairly wide range of genres, and Ghost Ship's sound covered the country gospel area, with a marginal amount of bluegrass for flavor, and a smack of alternative to keep it lively. "Invitation" is ripe with banjo, and it's a great start to the album, while "You Loved Us First" sounds like a Third Day/MercyMe hybrid. Personal favorites come in the encouraging "Adoption," which - as the name implies - talks about how God not only washes our sins away, but He also adopts us into His family as His children. It's my highlight, for sure, but I also enjoy the imagery in "Heavy As The Sea." It's hard...well, impossible, actually, to compare God's love to any physical thing, but Jesus used parables, so it must be okay. This song does just that, worshiping and praising God, whose "love is as heavy as the sea." There have only been a handful of worship albums this year that I've enjoyed at all, but Ghost Ship's Costly is among them. A solid mixture of country gospel, contemporary pop, and alternative, it's a little more radio-friendly than I'm used to enjoying, but it's not a bad album, and it'd fit well next to your Rend Collective or Third Day albums. (Probably not alphabetically, though.) - 8/26/15, Scott Fryberger of Jesusfreakhideout.com