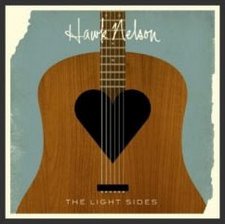 Before immersing themselves in working on what would become their fifth full-length studio album, Hawk Nelson shut themselves up in the studio to record an 11-track acoustic album, appropriately titled The Light Sides. While you can grab The Light Sides as part of a Deluxe release of Crazy Love (click here for our reviews of Crazy Love), the real treat of the two-album combo may actually not be the thirteen tracks of completely new tunes, but it just might be this extra disc, The Light Sides.

Leading off with one of the band's most popular songs of their career, "California" is given an accapella reimagining that utilizes the vocal talents of the foursome as lead singer Jason Dunn directs the pack. It's a fun Beach Boys-esque take on the song that sets the stage nicely for what fans can expect from the following ten tracks. "Friend Like That" is next, given an acoustic guitar and hand-clap update. Unlike "California," however, it sticks pretty close to the original composition, just in a stripped down form, and it's a nice addition here. Already originally a pop rock ballad, "Zero" may actually work better as this acoustic remake. It makes the tender song inspired by suicide seem more pensive and intimate (despite a maybe out-of-place organ here and there). A real gem for fans is the inclusion of "Stagefright," a song that was merely a partial song tucked away at the end of their previous album, Live Life Loud. The fully fleshed out song is given full drum support along with the acoustic and related percussion accompaniment. It makes for a fun highlight in the collection. "First Time" gets a frenetic refacing, oddly edgy for an acoustic take but gives the song a fresh feel for the new decade. "You Have What I Need," from Hawk Nelson Is My Friend, follows, again staying close to the original with a merely acoustic repackaging. Like "Zero," "Everything You Ever Wanted" is just a further-softened version of the original ballad that seems to work even better in this format. The composition of the song is almost identical, but it fits well among the songs selected here (even though it does feature an actual electric drill sound towards the end of the song mixed into the track. Jason has admitted at live shows to just throwing it in there late one night in the studio... which makes it pretty amusing when you finally hear it on the track). "Head On Collision," from Smile, It's The End Of The World, is a treat to hear stripped down to an acoustic base. The gang "na-na" vocals also make a great accent to give the song a good update and potentially a better rendition than the original. Surprisingly, the only other track from Live Life Loud to make an appearance on Light Sides is the already mellow "Long Ago," but it's another track that translates wonderfully in its acoustic form. To close, the pop rock quartet updates two more fan favorites from their debut, Letters To The President, the ballads "Take Me" and "36 Days," the latter of which even features slightly updated lyrics.

In the end, I actually found myself enjoying The Light Sides more than Crazy Love. The new studio album has a few standout tracks, but The Light Sides, surprisingly, seems to capture Hawk Nelson in a more comfortable setting. The song selection is strong, although I would have liked to have seen a track or two from the new album given the acoustic treatment here, and maybe another track from their previous album. The production is clean without sounding too synthetic, but it is a step above just vocals and acoustic guitars. The band went the extra mile to add plenty of flavoring to these stripped-down takes.

For fans of the band, The Light Sides is well worth the investment alongside Crazy Love. And for those who've enjoyed the softer side of Hawk more than their more edgy offerings, this acoustic project is a solid option. Hopefully we'll see another acoustic release from the guys before too long.