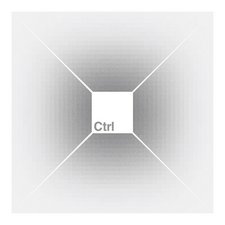 If anything is can be expected from Derek Webb, it's that no two albums will be the same. In 2009, he abandoned his acoustic folk stylings for digital experiments in Stockholm Syndrome. The following year, his worship album announcement turned out to be a classically composed electronic instrumental project called Feedback. Since then, it seems he's always up to something -- producing, remixing, collaborating, and leading his fans on online scavenger hunts when new music time comes around. So what could the long-awaited follow-up to Stockholm Syndrome have in store? One might expect another political, controversial piece, especially during an election year, but instead Ctrl surprises by turning the conversation inward. The result is one twisted trip down the rabbit hole, juxtaposing dark drum loops, Sacred Harp choir samples, and nylon string guitar melodies to blur the lines between reality and dreams, and explore the tension of death and resurrection, darkness and hope.

In the past few years, Webb has perfected a marriage of synthetic and organic sound, and Ctrl brings this new style back to his folk songwriter roots, mixing flourishes of choral samples into his ambient soundscapes. The somewhat off-key passion of untrained choirs burst in and out, trading vocals with Webb in an out of time duet, serving as transitioning interludes, or emerging out of nowhere to create an otherworldly atmosphere. In fact, they set the stage right away with opening track "And See the Flaming Skies." Ambient sound and a sample of Sacred Harp hymn "Indumea" kick off the album and lead into Webb singing "And am I born to die? / To lay this body down!" The effect is startling and apocalyptic, yet the urgency and emotion in his voice keep the human element alive.

At first listen, the whole experience is a weird, ambiguous journey. It wouldn't be too much of a stretch to compare his approach to Radiohead's classic OK Computer or Sufjan Steven's bizarre confessional experiment The Age of Adz. The contrast of synthetic drum loops with acoustic songwriting seems like a metaphor for humanity and spirit in a fast-paced digital world. The title Ctrl even appears to have a double meaning, as the spelling nods to technology and the theme of control recurs again and again. Normally, there is no mistaking Derek Webb's lyrical intent, as he has often issued challenges against the church and tackled political subjects. But closer listens and a bit of digging into the lyrics reveal a record about the politics of the heart, "Where all your wildest dreams are tame / all your fiction true / but you have less control of it / than it has of you" ("A City with No Name").

The poignant "Blocks" confesses "I love what I can control / So I don't love very much," before melting into one of Webb's most vulnerable choruses "I just want love / And I would do anything to get it." And so the journey goes through a maze of misplaced love, pride, and a desire for control, until the turning point comes in "I Feel Everything," a haunting lament to sensory overload, and a decision to relinquish all control, "I'm just a body overwhelmed / And lying still / A casualty of knowing what I want and wanting what I know." The ultimate end is not nihilistic despair, but hope, waking up, and coming back to life. In one of the record's most powerful moments, the choir returns singing "Farewell Anthem," a beeping heart monitor sample moves from life to death, and resurrection begins in the airy, uplifting "Reanimate": "I feel my body move / The haze start to lift / Like waking from a crash... my eyes finally see."

Ctrl is tough to define, because it's a puzzle that offers more questions than answers. The woven sounds and haunting lyrics pull the listener into the mystery, even at its most unexpected turns. Multiple listens start to unravel the layers; sudden choral samples and strange musical twists turn out to be charged with meaning. Those who enjoy a cerebral challenge could find a lot of fun in puzzling out the depths of this record, as well as discovering the links to Webb's side project Sola-Mi (A free download and a must-have companion). Those who might have been turned off by his message-driven writing in the past may find this more confessional side of Derek Webb worth another chance. Ctrl is ultimately a surprising, perplexing, and overall redemptive piece of art.

It's been a relatively busy year for Derek Webb. Not only is he constantly occupied with running NoiseTrade, but he also released an album with his electronic side project, SOLA-MI, found time to do a remix album for Page CXVI as well as craft a brand new solo album. And once again, his solo work has taken another evolutionary turn, as Webb is always one to keep experimenting and progressing as an artist. His latest work, Ctrl - which has already been released through his website, despite Fair Trade Services' official release date in September - has removed a good portion of the electronic aspects that were so prominently featured in Stockholm Syndrome and Feedback. It's acoustic folk at its core, which is great, because we're all aware that Webb can do this and do it well. And of course, he proves it once again with Ctrl. His guitar playing and singing is so intimate, you can't really help but get drawn in and feel something when you listen to it. To keep things interesting, Webb brought along the voices of the Sacred Harp Choir, who intervene at different points in the songs. You don't have to wait long to get a taste of the choir; they're featured very prominently in the first song, "And See The Flaming Skies." Their slower-paced vocals mixed with the higher BPM of the song itself is an interesting combination that earns the title "acquired taste." I, for one, love it, but I think it will be a hard sound for some people to get used to. They aren't featured in every song, but the same can be said for just about every time they do make an appearance. They play a smaller role in one of my favorite tracks, "Attonitos Gloria." It's almost like a rock song, with uptempo rhythms and melodies as Webb sings about being paralyzed by God's glory. If you've been a fan of Webb over the years, Ctrl is another album to add to your collection, and it's one of the better acoustic folk albums of the year thus far. - Scott Fryberger, 9/2/12