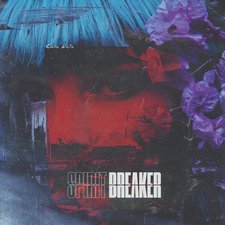 
Solid State Records, almost a quarter-century into their existence as Christian music's premier heavy music label, is now a label with a deep roster of veteran bands, many with a decade or more of music in their discography -- and that makes it so exciting when a new young band signs on and drops music with the destructive force of Michigan progressive metalcore band Spirit Breaker, a dynamic group of twenty-somethings whose second full-length and Solid State debut, Cura Nata, has arrived, an album accurately described by the band's press materials as being intricate, booming and "uniform in tone."

That is an apt description, and that uniformity of tone is a crushing explosion of metalcore emotion that, aside from the slow build of quieter opening track "Stardust Memory," is unrelentingly heavy. Cura Nata does not take long pauses from its furious rage for mellow intermissions, clever catchy hooks or radio-friendly singalong choruses; it is nothing but devastating metal for ten straight post-intro tracks. But in the style of similar bands toward the more musically progressive style of metalcore, such as Silent Planet or Invent Animate, that brutality is laid over a bed of atmospheric sound that lifts each song and sweetly fills the brief spaces between the heaviest moments with quiet ambience. The guitars lean less on flashy leads or show-off solos, instead focusing on consistently deep riffing and the sparse use of clean guitar effects for space. Also of note is the drumming, which is never mechanical or predictable and not trying to win any death metal speed competitions, but in the style of Silent Planet's Alex Camarena constantly varies the fills and patterns to keep the songs from becoming bland, and pushes a consistent sense of urgency. The unexpected blast beat interlude of "Flauros," the powerful and emotive fade-out of "A Cure for Wellness," and the soaring 6/8 fills of closer "Lux Nova" are musical highlights, still exciting for me after multiple listens.

Though the instrumentation is above average for this genre, vocalist Tre Turner is the real breakout star, showing an incredible range all the way from guttural death growls to a shrill shriek and everything in between, and even finding a bit of melody in the shout-singing of a song like "Flauros" that channels Norma Jean's Cory Brandan. Turner immediately establishes himself as a notably powerful vocalist within this genre, constantly propelling each song forward with fury while switching between scream styles seemingly with each line (it will be really interesting to see how well that can be replicated live), and combos the considerable punch of his screams with lengthy and equally devastating lyrics delivered with an impressive level of raw honesty. Self-reflection finds a hopeful path in "Inhabitant" ("With self-destruction at an all-time high / Is a wavering will enough to get me by? A perturbed voice sought a throne in my head / I'm not giving you in an inch, I haven't given up yet; Sometimes we succumb to voices of our self-woven despair / But hope illuminates a path despite our darkest fears"), while a song like "Holopresence" turns more confrontational ("I'm fed up with hating myself / The devil tried to bring me down and drag me to hell / Farewell you pathetic snake, I'll find joy in knowing my heart was too much to break / Lightbearer, I have no weakness"). The lyrics read almost as free-verse poetry at times, and are worth reading since they are sometimes hard to decipher otherwise.

If there's a disappointment to Cura Nata, it's a similar one experienced with many (maybe even most) bands in this genre when a full-length album is released; by the end of the listen, the songs lose a bit of their distinction, and may be hard to tell apart. But the songs are carefully constructed and each stands on its own as an important contribution to the overall album. In listening to Cura Nata multiple times for this review, I found myself on each new listen noticing a different part of a different song, one of the many intricacies that create the whole of each track. A surprising drum fill here, a simple guitar lead to fade out a song, a light bed of atmosphere or a quick retreat to clean vocals to vary the mood -- even if I couldn't always remember which song this was, I was never bored. Cura Nata is a really impressive progressive metalcore album that avoids over-reliance on predictable breakdowns and genre formulas. It is lyrically deep, always musically interesting, and uniformly brutal and heavy throughout. There is a lot of very promising music still to come in 2021, but as of now, this is my favorite heavy album of the year to date, and Spirit Breaker is clearly an exciting young band with a great future ahead.

Solid State's newest signing isn't wasting any time - within a couple of months of the announcement, Spirit Breaker's label debut is upon us. Cura Nata is a solid metalcore album that takes the best of Silent Planet and Oh, Sleeper and mashes them together. It's heavy and intense, but it also has a strong sense of melody. A great example of everything they do well can be found in "Hello, Drifter," a song which features every member of the band at their best at all times. Other highlights for me are "Pure Fury & Wonder," "The Mountain Between Us," and the closer, "Lux Nova," which caps the album off with a dose of hope: "Gentle hands, place Your love on my bones / Gentle hands, mend this broken soul / Carry me home / In Your embrace, these earth-bound chains collapse / In Your embrace, I feel innocence pulling me back / Into love, I cherish the sun / As it lights eternity upon Your face." Spirit Breaker is a great addition to the Solid State roster and I have a feeling that the best is still to come. - Review date: 8/12/21, Scott Fryberger of Jesusfreakhideout.com