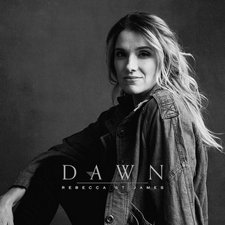 
The incredibly difficult year that has been 2020 has brought with it discouragement after disappointment and an overall tense atmosphere. Thankfully, there is a small glimmer of hope with CCM veteran Rebecca St. James returning after a nine-year absence to release a six-song EP, titled Dawn. With such a large gap between proper albums, most artists would run the risk of starting over from scratch with their fan base, but due to her beloved status, her brothers' band for KING & COUNTRY's grip on the genre, and the overall release timing, she seems poised to pick up some new fans of the modern worship genre. However, longtime fans of her earlier alt/rock, EDM, and pop/rock eras may find themselves out in the cold longing for yesteryear.

After a brief prelude eases the album open, St. James wades out into a mid-tempo groove on "Middle of the Fire" with a big assist from Bethel Music's Josh Baldwin. The tune would be easy to hear coming from a for KING & COUNTRY album, crafted for immediate play on modern radio. The synth-pop "Ready for the Rain" is a modern sound, though Rebecca strays not from the album's vertical lyric approach in which the album is firmly anchored. Regardless, it's one of a few highlights. "Fall Back" slows things down with a simple and reassuring chorus, "With my hands high/My heart open wide/I fall back into the arms that hold the world/Into my fathers love/Like a child I come/I fall back." Though it's nothing that hasn't been said before, it is an overall calming and pleasant track. The title track is probably this reviewer's biggest standout as James is joined in duet by her little brother, Luke Smallbone, with the vocal blend proving a good match carried by a stirring string section and earnest lyrics of surrender. "The Battle Is The Lord's" is the first single from the EP, but to this reviewer's ears, it is only a middle-of-the-road tune (though the lyrical sentiment true).

In fact, the above criticism is the biggest gripe with this record. Though worship music is where St. James' identity is strongest in this season of her life, some choices like auto-tune and a proclivity to co-write with genre contemporaries leave the album with a been-there-heard-that feel. That's a real shame because Rebecca successfully transitioned from CCM pop, to alt rock, and pop rock before settling in this pop/worship groove. Perhaps a longer, and solo, gestational period devoid of those already pumping out similar sounding music would have helped the EP shine brighter. Further still, this may be one instance where an EP's shorter tracklist did a disservice. Undoubtedly, filling out the album with a wider sonic palette with a nod to fans of her other musical directions would have give the album a greater memorable factor.

Unfortunately, though there were high expectations and a willingness to continue down the worship path with RSJ, Dawn comes and goes, largely falling victim to the glut of synth-based worship projects released before it. The production choice to obscure her voice on a few songs does add variety but just doesn't quite match, leaving it a distraction. That's not to say this isn't a decent return; it simply falls short of what could have been. All things considered, it's a good album, bordering on solid if you like the genre, and at the very least a welcome comeback from a beloved CCM voice. Whether the music is your cup of tea or not, it's simply good to have Rebecca back releasing new music, and hopefully there is more to come.