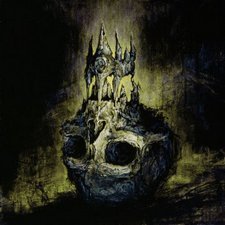 When I first heard The Devil Wears Prada's With Roots Above and Branches Below, I spoke of ideal musical progression. Sure a lot of people loved Plagues, but the reception doesn't really compare to what they garnered from their regime change with Roots. But my biased ears are those of a stranger to the band. For them, it may have been less about progression and more about trying new ideas. I consider that now only because of what I hear in their brand new full-length album Dead Throne. Just as their sound changed from Plagues to Roots, it also changes to Dead Throne. This time, the transition isn't as drastic as the band's Zombie EP appropriately bridged the daunting gap between Roots and this.

If Roots is the last TDWP album that you have heard, you may have to remind yourself that you are listening to the same band. The rampaging immensity from Zombie can still be found in Dead Throne in doses: "Forever Decay" is easily the most intense track on the album, and will punch a hole in your face about as deep as Zombie did. But so can be found the sound of Roots, like in "Vengeance" and "Constance," where the machine gun chugging and clean vocal choruses take the show. Besides the old habits, expected by fans, transferred over, there is tons of original progression to talk about.

The breakdowns and the clean vocal choruses are still there. In fact, guitarist Jeremy DePoyster's singing shines in "Mammoth" and "Constance," but in between the regular highlights, Dead Throne is dominated by riffs. Even in Zombie, TDWP have been steadily forgoing the general metalcore style, and embracing more classic metal themes, brought on by vocalist Mike Hranica's oft-professed love for Slayer. Handing more love to melody with smart, hooking riffs takes away from the bolstered rhythm obsession of metalcore, but gives the drummer room to rest his feet from time to time and play more creative beats that don't use the double kick as a crutch. The tempo fluctuates effortlessly and fluidly throughout each track; this is not to be taken for granted. Most drummers either try too hard and ruin the structure of the music or don't bother trying at all and bore their audience with tedium.

Something you can find throughout Dead Throne is TDWP's refusal to walk in line. They recognize the worth of each instrument. It's not just the shine of the lead guitar or how fast the drummer can blast beat. Each piece is valued, and each is given the chance to shine. Andy Trick especially, as the bassist, is at the greatest risk of going unnoticed, but again and again he pops into the foreground, not stifled by the guitarists. Bass does indeed have its place at the center of attention when utilized properly, and TDWP have found a quirky yet satisfying method of instigating this. Improvement can be mentioned for nearly every member; I just wish somebody would tell me what happened to Hranica's voice since last year. His effortless range from high to low is still singing strong, but the power and crispness has taken a blow, sounding whinier: more like a hardcore yell than his usual growl. If the change was intentional, I consider it an unfortunate one. This is, however, the largest of my complaints.

Even if they contributed much to what is now commonplace and overdone in metalcore, they leave the past in the dust and carve their own path. The best examples of this progression are "Kansas" and "My Questions." The former is an atmospheric interlude with a driving beat and a fantastic odd-time breakdown in the middle that reminds me of Tardive Dyskinesia's "Ask E Sea." It could potentially be used as an archetype for the maturity TDWP have embraced since Roots. The latter quickly went from being uninteresting on my first listen to one of my favourites on the album. The sliding guitar riff is enchanting with Hranica's piercing scream taking the reins.

By escaping the metalcore cookie-cutter, they redefine what the tired genre can sound like. Sure, there are plenty of underground bands that have pushed the envelope for the genre long before Dead Throne came around, but let's face it: The Devil Wears Prada has a bigger fan base.

After releasing With Roots Above and Branches Below and unintentionally spawning a million copycat bands who practically built their foundation on what TDWP did better than all of them (We Came As Romans and Attack! Attack! to name a few), they nonchalantly moved on to write Zombie, and we all know that didn't sound much like Roots. This should make it obvious for anyone following along that TDWP don't care about creating or following trends. Like every real band, they write music that they want to play. Sure a lot of their fans wanted them to write a full-length continuation of Zombie, but at the heart of it, they're artists. Why create the same masterpiece more than once?

Mike Hranica and the boys of The Devil Wears Prada continue to impress. The guys who started as your average, everyday metalcore outfit have grown into something so much more. This was made evident with the release of the Zombie EP and now solidified with their newest effort, Dead Throne. The band shows maturity in everything from the vocals, to the musicianship, and even the song titles. The album starts with high energy on the title track, "Dead Throne," and keeps it going with songs like "Born to Lose" and slows down for the instrumental "Kansas" (an absolute favorite) and the song "Constance." The battle of low growls, high-pitched screams, and nicely sung clean vocal sections battle fiercely throughout, while the guitars take a heavier approach than on their earlier albums. Though it's a close call, Dead Throne is just slightly less impressive than Zombie EP. The non-stop, pulse-pounding energy of that EP will be a difficult thing for the band to top. There is no doubt about it, while other bands have been content to remain stagnant in the breakdown muddled waters of the genre, The Devil Wears Prada have chosen to step beyond those boundaries and create something better. The days of funny song titles that have nothing to do with the song itself are gone and the days of a certified metal band have arrived. Dead Throne is a must have for metal fans and a serious contender for the best metal album of the year. - Michael Weaver, 9/10/11