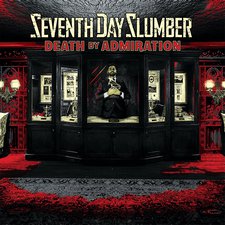 
Veteran rockers Seventh Day Slumber have been on a roll, producing plenty of music over the past few years. After the success of Found and Closer To Chaos, the band released a couple of worship projects, something they had not done since their days with BEC Recordings. With Death By Admiration, the group is back to their traditional rock roots, boasting a sound that is heavier than ever.

To kick things off, the title track immediately grips the listener's attention with giant riffs and a smooth chorus. Tyler Smith, singer for The Word Alive, makes an appearance on the song, adding an extra element that sets the tone for the rest of the record. "Fatal Love" and "Solemn Oath" follow in the same musical vein; with the former being a plea to those struggling to not lose hope: "Sometimes life brings you pain / Don't let go, you'll be okay / In the light, whispers fade / Day by day, you'll find your strength." Previously released single "What I've Become" focuses on the issue of hating one's self, while the haunting "Halos" speaks to the pain of losing a close one unexpectedly. Lead singer Joseph Rojas sings, "And I know it's not my fault / But I'm so consumed with the thought of your last words / Questioning everything / Can't reach out now, it's too late / Why's it so hard to say goodbye? / So long 'till we meet again."

"Snake Mouth" is a bold way to start the second half of the album, as the number blasts hypocritical so-called "evangelizers" who are only in it for their own gain and glory. The band does not hold back from getting their message across, going straight for the gut punch: "My friend, it's not your kingdom / You'll come down from your throne, and your tongue will confess / As your knees hit the ground before a God you've never known." The string of "Light The Way," "Landmines," and "Some Things Never Change" maintain the rocking pace, and fill out the rest of the project quite well. However, SDS changes direction for the final track, "Can't Say Sorry Enough." Acoustic guitars and ambient strings take center stage, allowing for a reflective moment as Rojas is awestruck by God's never ending love, "How could you still not hate me? / You've always seen the best in me / Even when I'm at my worst / You were fighting for me."

What Seventh Day Slumber consistently accomplishes is bringing the message back to what is most important: faith in Jesus Christ. This is made evident during the title track, which starts off on a depressing note, but ultimately shows Rojas' faith in God regardless of the mental tribulations: "I'll find a way / I will escape / And God I know that / You're here with me / You'll never leave." In a world where bands continue to water down their lyrics, it is encouraging to see SDS sticking to their guns, shamelessly declaring the truth to whomever might hear it.

Death By Admiration is certainly one of the band's strongest endeavors, and may just be their best work yet. The musicianship is top notch, and Rojas' vocals have shown improvement in multiple areas. This growth was initiated by Memphis May Fire's guitarist Kellen McGregor, who produced the record, influencing the band to go in a heavier direction. Those searching for a solid Christian rock album will be delighted with what they find here, as Death By Admiration is well worth the listen.

Heavy, groovy, and more technical than anything Seventh Day Slumber has done in their lengthy career, Death By Admiration is an early contender for album of the year, and is far and away the best thing this veteran band has ever produced. SDS has always fallen nicely into the rock genre (even in their excellent worship covers), but this album is nothing less than high-octane metalcore, complete with detuned guitars, breakdowns, and a "punch you in the face" production. The only remaining tie to the rock genre is lead singer and founder Joseph Rojas' mid-range, pure-toned vocals, which might catch a few listeners off guard if they're expecting traditional metal screams. I for one appreciate this "all-clean" vocal approach; it gives the band a unique twist, and makes the few guest "screamo" appearances hit even harder (the "rapcore" break in album-highlight "Snake Mouth" also works surprisingly well).

I also greatly appreciated the lyrical quality featured here. While many artists talk from experience of being hurt by someone (or themselves) and wanting revenge, Rojas unceasingly points to Christ as being his only hope for a better life, "Running from the pain/God, am I too late/come and open up my eyes/I give it all to you tonight" (from "What I've Become"). The only thing keeping this album from a perfect score is the lack of variety from song to song, especially in the vocal melodies, and the infrequent use of high-fretted guitar work (the lone solo is stellar in "Landmines," making me really wish for more in that department!).

To say I'm excited about this album and what it could do for Christian rock and metal would be a vast understatement. I hope it reaches the ears of all those who've been longing for solid Christian metal, especially those who prefer clean vocals; you will not be disappointed. - Review date: 2/6/22, Joel Zaloum of Jesusfreakhideout.com