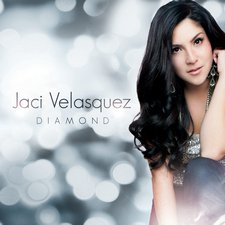 The longer time one waits between releasing albums, the more intriguing the results can be. Once a mainstay in the Christian pop circuit, Jaci Velasquez still checks in from time to time, and Diamond comes to her listeners four years after her last effort, Love Out Loud. While certainly attractive, however, Diamond's rough edges become regrettably noticeable.

Largely covering a contemporary pop vibe, Diamond doesn't feel very surprising in its execution, although this is probably the most radio-friendly Velasquez has ever been. Some songs do branch out a bit from this base, however, including the dance-flavored "Trust In You," the spritely "Girl" (which musically sounds extremely similar to Francesca Battistelli's "I'm Letting Go"), and the Latin-infused "Con El Viento A Mi Favor." The final track, "Good Morning Sunshine," takes the most time to build up to a strong climax with pianos and strings; featuring Velasquez's strong vocals and enduring ability to lead a song throughout its duration, it is Diamond's crowning achievement.

Several previously mentioned tracks choose to deviate from the common sound, but in general, Diamond is a dull product from a seasoned singer/songwriter. "Give Them Jesus" is a built-for-radio single all about missions, but very little about it feels especially inspired, and the title track, "Tell Me Again," "Guilt," and the anthemic worship song "The Sound Of Your Voice" all fare the same in their appeal. While it is indeed nice to see at least a little bit of Velasquez's Spanish thrown in for good measure, those who don't know Spanish are unlikely to glean much from "Con El Viento A Mi Favor" (which roughly translates to "With the Wind in My Favor").

Unlike many pop albums from artists who haven't stood the test of time, Velasquez has pieced together a record of perfectly acceptable material that certainly has highlights here and there. On the other side of the coin, however, Diamond feels uncharacteristically uninteresting. Every box is checked, but songs with innovation and vibrancy just aren't to be found here. Velasquez has certainly adapted her sound to one that will withstand a long radio life, but unlike much of her previous material, it feels forgettable. No "On My Knees" or "God So Loved" are present here, and one would be hard pressed to find a song with long-lasting flavor like these.

With 2012 marking 20 years of music from Velasquez, Diamond serves as an interesting project to compare with her previous work. Every one of Velasquez's albums has featured its own style to easily differentiate from others in her catalog, and Diamond follows suit. Though not without its shining moments, however, Diamond doesn't deliver consistently enough to be the rewarding pop album it yearns to be, leaving better pop efforts for which listeners should mine.

Jaci Velasquez has had a rewarding career in music thus far and she has often kept her listeners on their toes as she's stretched herself a time or two in unexpected ways. Her ahead-of-its-time Brit pop effort Beauty Has Grace was under appreciated and never received the attention it deserved, which eventually pushed the artist toward more contemporary pop projects after that. Diamond is one such album, and unlike the records that have come before it, it doesn't quite represent all that Velasquez has to offer as an artist very well. It follows the pop music rule book a bit too closely, even offering up a worship anthem in "The Sound Of Your Voice" that begs to be sung on Sunday morning, while a few other songs flirt with a rock or electronic sound. And although repeat listens to the album do draw out a couple gems (namely "Good Morning Sunshine," "Fall For You" and "Guilt"), Diamond just doesn't seem to pack the same punch as before. Diehard fans will probably still find plenty to be excited about--if not just for the fact that Jaci is back in the proverbial saddle again, musically speaking--but those looking for a taste of Jaci's best should probably check out one of her previous projects. - Review date: 2/6/12, written by John DiBiase of Jesusfreakhideout.com