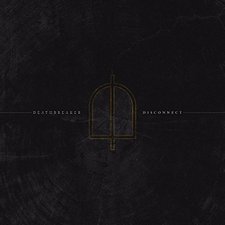 
It's not often that a band enters the scene with a major-label debut as confident and self-assured as the one Washington-based Deathbreaker has created with Disconnect. While the quality of artists on Facedown Records has only improved over the years, Deathbreaker immediately demands attention as one of the label's best new bands in recent memory with a no-holds-barred hardcore/post-hardcore sound that is both refreshingly simple and tons of fun.

Clocking in at a succinct 34 minutes, Disconnect is sharp, focused, and unashamedly aggressive. Avoiding the chugging slug-fests of many of their label-mates, Deathbreaker instead focus on simple, straightforward hardcore with a strong sense of rhythm and a pleasantly bare-bones approach to riffs and breakdowns. It may not be the most technical heavy music you're going to hear this year, but it makes up for its simplicity with energy to spare. The manic crescendos of tracks like "Earthbound" are reminiscent of Norma Jean at their best, and there's a subtle but effective foundation of melody in tracks like "Blink" that grounds the music nicely. Throughout the album, there's a refreshing adherence to traditional song structure that helps keep the music focused and provides opportunities for the development of musical ideas. The end result is a coherent sense of aggression that ebbs and flows logically and doesn't get bogged down unnecessarily.

There are flaws, of course. The detuned, dissonant guitar riffs that crop up in several tracks are a little heavy-handed and repetitive. There are the occasional moments of cliché metalcore excess, including random instrumental interludes that don't add much to the album. Thankfully, those moments are short overall. Some listeners may find the slower, somewhat spoken-word vocal segments in several tracks to be a little dull, but they do offer the opportunity for some nice dynamic contrast. This is especially apparent in the aggressive buildup of "Eclipse." That being said, there's wisdom in not trying to do too much, and Deathbreaker seems to get that.

There is certainly still room to grow for Deathbreaker. While Disconnect is a tight, fun hardcore album, it may not be unique enough to stand out in the sea of similar bands. Additionally, the harsh vocals are pretty one-note and could use a little more range. Nevertheless, Disconnect is a tremendously fun album and Deathbreaker clearly have a bright future ahead of them after laying such an impressive foundation.

With a new name and a new platform with Facedown Records, Deathbreaker comes out of the gate strong with Disconnect. One's ears are immediately pummeled with the opening track, "In Error," where the band really shows us what it's made of. "Earthbound" is one of my favorite tracks, with an Underoath-esque style of guitar riffs and dissonant chords, but with a purposefully less-polished crunch. Melodic hardcore is also an important element in Deathbreaker's sound, as evidenced in songs like "The Sinking" and the emotionally-fueled closer, "Absence." With how easy it is to be another grain of sand on the beach of hardcore bands in the world, it takes a lot to win the crowd over and keep on for the long haul. If Disconnect is any indication, Deathbreaker is a band that has a very bright future. - Review date: 5/9/17, Scott Fryberger

Sitting alongside artists such as Rival Choir and Norma Jean, Deathbreaker showcases a brand of hardcore that is both relentlessly aggressive and emotionally raw. Mixing the melodious with the chaotic is a difficult sound to pull off, yet Disconnect achieves this almost seamlessly. "Earthbound" and "The Sinking" are excellent tastes of what this album has to offer overall. Aside from a slightly predictive song structure and two less than stellar interludes (although "Son" is arguably more effective than the pedestrian "Father"), Disconnect is a highly enjoyable debut from one of Facedown's most promising new artists. - 5/21/17 Lucas Munachen