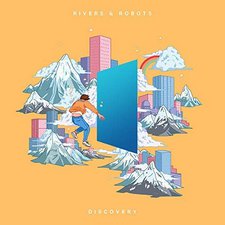 
With their newest album, Discovery, Rivers & Robots releases their fifth full-length album of indie-driven, atmospheric worship. For those unfamiliar with their previous work and are curious of their sound, think of the guitar tones of Explosions in the Sky, touches of MuteMath, and flourishes of John Mayer's chill vocal vibe. All the while, they sound exactly like none of the aforementioned artists, and do well to stand out in the over-saturated worship genre. There is little to no bombast to be found, and most songs settle into a nice mid-tempo groove, without the common trouble of all the songs sounding too much the same.

While the first three songs set up the album nicely, it isn't until "Burn For You" that the album hits its full stride. The song itself is a co-write with artist David Brymer, and features an earnest vocal, declaring "Wake me up from my slumber/fill my heart with your fire/Cause I want to burn for You." The vocals are carried along on a bed of beautiful violins as the song waltzes forward and into its conclusion. Song "Provider" follows with chiming guitars and a chugging beat. It's an upbeat tune that drives home the point that God is the provider for "every season of life." Track "Overflow" takes the slow building approach until the last third of the song that transitions to a reverb soaked effect, until ultimately ending in the controlled chaos of swirling strings, drums, and electronic noises. "Brighter Than The Sun" includes a female vocal from singer/songwriter Lucy Grimble, which provides a great texturing harmony. The title track sounds closest to instrumental band Explosions in the Sky, and floats along atop airy guitars as the near-whispered vocals state, "Lord I need You In my life/Nothing else can Satisfy/Now that I know/I was made for this discovery."

The last song of the album, "Forevermore," is this reviewer's favorite of the track list, and ends the album with its best song. It is gently pushed forward with an acoustic guitar, supplemented by light percussion and synths behind it. The song itself takes an unusual approach, in that it has three verses, one right after another, then musically begins the familiar build toward the bridge, sans words. That's right; the last 2:30 minutes of the track's run time is beautiful, emotional, and worshipful without a single word being sung. In addition, without being heavy-handed, they add an artistic twist, where in the last thirty seconds, we hear the music as if it has fallen underwater for a few moments, only to re-emerge as the music changes. The song ends with angelic chimes and the familiar sound of waves crashing onto shore. Again, it's a well-done piece of artistry that has this reviewer listening to the song again and again.

This independent Manchester, UK based band expertly marries "the combination of acoustic and electronic sounds" within their music--hence the band name Rivers (acoustic/organic) & Robots (electronic), which hits the self-described goal to "make Jesus known through creative worship." With so many of the top names in worship stuck in a similar sounding rut, this is one band that should be praised for the near perfect balance of artistry within the worship genre. Do yourself a favor and add Rivers & Robots to your playlists immediately.