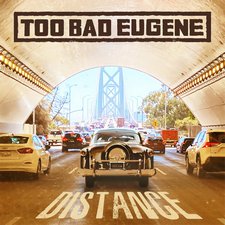 
In 2002, Tooth & Nail Records released an album called Moonlighting from a fledgling punk band called Too Bad Eugene. The album was good, but was ultimately overshadowed by its labelmates, and the group quickly parted ways. But now, in a rather unexpected turn of events, the band is back together for their first album in two decades, and it's one of the best comeback albums I've heard in years.

Distance is a tried-and-true Too Bad Eugene album through and through. If you're familiar with the band's previous two albums, you can go in expecting more of the same goodness found in At Any Rate and Moonlighting, but with more maturity and better production. If not, you may be pleased to know that the band's melodic punk rock style is reminiscent of bands like Slick Shoes, Hangnail, Ghoti Hook, and Craig's Brother (not too shocking, considering they shared band members). I get a real kick out of the fact that they hardly ever slow down the pace; tracks like "Non Grata" and "Take Another Shot" are upbeat and melodic, while "Anecdote" and "Get Back There" are in-your-face punk rock tunes. Don't get me wrong, I love a good ballad and acoustic track, but you're not going to find any of them here (though "Distance" and "Through the Window" are a little more down-tempo). You will, however, find plenty of good riffing and classic pop punk drumming, with catchy melodies and toe-tapping rhythms.

When it comes to the theme of the album, it's a little varied. One of my personal favorites is "Stuck," which throws away all of the politics and arguing surrounding the Covid pandemic and instead focuses on the togetherness aspect. Adam Nigh spends the song being thankful that the forced lockdowns created more opportunity for family time: "All the crazies with theories online / just shut it off, leave all that noise behind / come set the table, let's eat, laugh and thank God for His gifts / 'cause things get so clear when you slow down / you can see what really counts / for me that's you three I live around / you're the joy of my life." The song even features a bridge from his daughter Mercy, which, as a father myself, is pretty awesome (his wife Rachel also appears on the previous track).

A good portion of the album, though, takes it straight to religion, specifically Christianity. The church today doesn't look like it should, and Too Bad Eugene boldly points that out all throughout the album. "Talking Head" seems to call out false teachers, which continues quite nicely into "Deconversion Story," a tale of a young girl who left her faith after getting a job at a church that was more about selling a product than ministering the Gospel. Nigh also brings up this product idea again in "Anecdote," which recounts a man at one of their shows that hated their set because they didn't mention Jesus on their songs, but loved the Christian lyrics of another band whose singer wasn't practicing what he preached ("He liked this other band with cheesy Jesus songs / when they played, I saw him sing every word along / but backstage, their singer was vulgar and depraved / he sold a fiction and the suckers gladly paid / it's a shame what religion is reduced to when purveyed as consumer products)."

Upon listening through to the final track, "January 6 (A Prayer of Lament)," and hearing a band that is worn out by a world full of people serving the devil with their actions while claiming Christ with their words, it's easy to be hit in the face with the serious tone that the album carried the whole way through. While pop punk can be a lot of fun and lighthearted, Too Bad Eugene is using it to convey some important messages. Distance has its glimpses of love and heartbreak songs, but it's mostly a call for the Church to change. Between that and the high quality punk rock, I'd be foolish to not highly recommend it