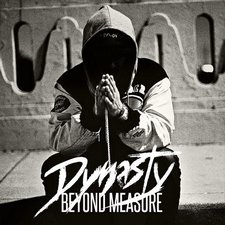 Bringing their own brand of hip hop-influenced, SoCal hardcore to Facedown Records is Dynasty, who have moved over to Facedown from Strike First Records after their 2011 debut album, Truer Living With A Youthful Vengeance. It was their very first release despite having seven years as a band under their belt. Sadly, that album was a bit rushed after their contract signing, resulting in less-than-satisfying results. But Dynasty is back and seeking to up their game for their follow-up record, Beyond Measure.

Dynasty offers up a solid dose of hardcore, and improves upon their previous effort a great deal. The intro is interesting, displaying an industrial-meets-southern-comfort sort of sound, but halfway through, the full band cranks it up and leads us into the fifty-four-second "Brick By Brick," which really gives us our first taste of what's to come on the rest of Beyond Measure. Just as they did with their debut, Dynasty offers their music in a quick fashion, with these twelve tracks spanning a mere twenty-five minutes in total. But such is the hardcore game. And when I say "hardcore," I mean traditional hardcore; Dynasty is for fans of a very specific type of hardcore music played by bands like Stick To Your Guns, Agnostic Front, Terror, and many others. But I mentioned these three specifically because those bands' frontmen all make guest appearances on Beyond Measure. Jesse Barnett from Stick To Your Guns teams up with Dynasty's Joel Muniz, as well as former Facedown brother Tommy Green of Sleeping Giant, to take on "Rise To Victory" together. The three sound great together, and it's not too difficult to tell them apart. Agnostic Front's Roger Miret comes in for the fast and furious "Hard Pressed," making himself quite at home, and Martin Stewart of Terror comes in for "Savage Mind." For the style of Dynasty's music, their choices for guest vocalists were excellent, even if one is not familiar with their respective bands. The one guest spot I was most excited about, but unfortunately most let down by, was the Wu Tang Clan's Inspectah Deck in the song "Get Live." I know the band members have an affinity for hip hop, and this is a cool and unique idea, but there's little to no hip hop influence anywhere else on the album, so the attempt at a hardcore/hip hop hybrid for Inspectah Deck to sort of rap on would need to be quite a bit different than the rest. Unfortunately, the style changes very little, so it doesn't work as well as I wish it would have.

Guest spots aside, Beyond Measure's Dynasty-only tracks are also fairly strong. Although it's pretty much no-foolin'-around hardcore -- it comes in, gets to the point, and goes out -- it's a good listen while it lasts. The only problem I had with it is that it tends to be slightly monotonous after a while. Though I appreciate their authenticity and determination to keep the hardcore spirit alive, a lot of the tracks sound generic, and difficult to distinguish from one another. The bright side to that, however, is that this type of hardcore music is a very niche genre, and its devoted fans and followers know exactly what they want out of it. A lot of times, telling songs apart isn't a requirement. For those that can tell them apart, it's a testament to how much the band is loved by that listener, as they have listened to it so much that it's nearly ingrained in their minds. So it's a double-edged sword; it could be better from a technical standpoint, but for the listener, it's just perfect. On top of that, the lyrics are easy to relate to, and for some listeners, will probably hit close to home. "Brick By Brick" is straight-to-the-point when Muniz screams "Out of step with this world, we will never belong." One of my favorite lines from Beyond Measure is "Been caught with death in my hand," from "Hard Pressed." I think that's one line that every believer can relate to when in the midst of giving in to temptation. Then of course, in "Get Live," you have to love "On the track like Danica Patrick." It may not be inspirational, but it's a clever line from Inspectah Deck.

I read in an interview with Dynasty that their Strike First debut was written, recorded, and released in a very short time span, which is one big reason why it didn't turn out so well. So with more time to do Beyond Measure properly, it's fair to question whether or not the band improved upon their formula. While it's easy to answer that with a "yes," it's not so much an emphatic one. Rather, it's closer to "yeah, a little bit." If you like traditional hardcore as described in the preceding paragraphs, you'll probably like this more than any other group of music fans. Those who like heavy music in general, but were turned off by Truer Living... should give Beyond Measure an open-minded listen, as it's an enjoyable album. It won't earn many repeat listens from this reviewer, but I respect and appreciate what they're doing for their genre, and I believe that they have even more potential locked away.