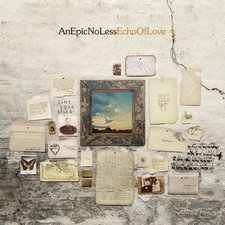 An Epic, No Less
Echo Of Love

It's easy to criticize the modern worship industry, and much of the criticism directed at it recently has been merited. While a seemingly endless stream of bands come and go, it seems that very little music of any artistic or creative merit is left behind. Mega-popular acts like Hillsong have seemingly championed a discouraging atmosphere of music that appeals to the lowest common denominator while sweetening everything with a perpetual use of tired worship cliches. An Epic, No Less ventures confidently into this miasma of mediocrity with their major label debut, Echo of Love.

At first glance, An Epic, No Less isn't really a worship band. Musically speaking, their sound is much easier to define as pop rock with a heavy dose of electronic influence in the vein of Owl City. The worship aspect of the band is found more in the lyrics than anything else. Virtually every track has lyrics that could be comfortably sung by a church congregation any Sunday morning. These simple praise words would best be described as taking the typical "adoration" approach to worship by praising God for his love and salvation. In a sense, it's encouraging that this band can make worship lyrics without sounding musically like typical praise and worship. Hopefully it will serve as a reminder that "worship" is not a style of music, but rather a message that can be applied to any musical genre.

There's certainly reason to complement An Epic, No Less for some of what they've accomplished on Echo of Love. Most significantly, they've crafted a nice collection of pleasant pop rock tunes with some truly enjoyable melodies. "Come to the Cross" and "We Need You" are highlights in this regard. The band also seems to have a wholesome innocence to their sound that will appeal to many. At the same time, they definitely stumble in some regards. The line between innocent and sickeningly sweet is a hard one to define, and the band occasionally stumbles over to the wrong side of the line. The frequent use of autotune definitely contributes to this error, along with frontman Todd Larson's somewhat nasally vocal delivery that bears similarities to Jessy Ribordy of Falling Up. This couples with lyrics that are as simplistic as any other worship act and instrumentation so gentle as to be almost nonexistent and the end result is an album that often seems to lack meat or conviction.

If anything, Echo of Love could best be described as tame. Coming from a band that clearly has real songwriting talent, it would have been nice to see a little more experimentation and more focus on the band as a whole. Instead, we get a thoroughly inoffensive and easily accessible collection of tracks that conform to all the traditional pop rock standards, and a generic production that discourages any instrumental creativity by forcing the instruments to take a back seat to the vocals. Even the electronic influence isn't very pioneering, as it sounds like a lite version of what we've already heard from artists like Owl City. Even the most upbeat tracks like "Caught Up In this Moment" fail to produce any real sense of energy, instead feeling like the band is still holding back much of what they could do. All told, Echo of Love has enough musical components to produce something memorable; they just need to be pushed harder and more thoroughly fleshed out.

If you're looking for something a little different to add to your worship playlist, there's no reason not to check out Echo of Love. Here you'll find some enjoyable pop tracks that will certainly help you praise God and perhaps relax a little bit. As far as that goes, this album is a success. Here's hoping that in the future An Epic, No Less will push themselves a little harder artistically and release something truly inspiring in a genre that is frequently the exact opposite.

An Epic No Less has set a high bar for their music with their band name alone. Echo Of Love mostly lives up to expectations, albeit, in a left-of-center way. With obvious comparisons to Owl City, An Epic No Less writes quirky, summery worship songs filled with studio trickery like vocal effects and blips and bleeps. At first, this might seem like an odd choice in a genre as earnest and straight forward as worship music, but the overall effect is actually, quite surprisingly, joyful. The band thankfully writes solid songs to garnish with all those effects. The album's title track presents a nice metaphor for loving the world, not with our own attempts at love, but rather echoing the love of God to those around us. Opening track "We Need You" is an appropriately epic and driving song of praise and "Mercy Light" is a surprisingly intimate cry for help that feels like a Psalm of David put to 21st century music. All in all, Echo Of Love is a refreshing, late summer addition to the ranks of new worship music. - Tincan Caldwell, 8/15/12