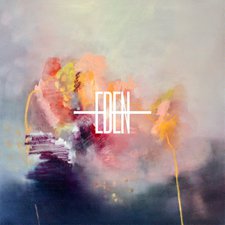 
Audrey Assad is a worship artist that has done it all at this point. Mainstream success, classic albums, a multitude of collaborations, a solid discography - she's accomplished as much as any musician in today's industry could hope for. Some might say there's not much ground left for her to traverse, but since 2018's Evergreen, it's clear that the focus of her work has become much more autobiographical. That release saw Assad struggle through a painful period of deconstruction only to emerge with a more wild, irrational faith. On the other side of that hill is Eden, which finds Assad at her most peaceful and regenerated, despite the songs being confined to a fairly bland electronic setting.

On the one hand, Assad's complete embrace of synths and drum pads is a bold choice. It's a move that sensibly adds color to her traditionally simplistic songwriting, and it contrasts well with her airy, vulnerable voice. On the other, the songs don't do enough with her new style beyond providing atmosphere and a sense of cohesion. "Shiloh" is electronic pop that goes as unremarkably as it comes. Following that is the best track on the EP, "Island." It's consistently upbeat, features the catchiest chorus here, and has a surprisingly funky bridge with a popping bassline. That momentary switch back to an acoustic setting doesn't completely fit, but it happens to be the best passage on the track list. As for the other originals, "Find You" is the most structurally intriguing with its primarily instrumental section persisting for most of its repetitive runtime. Unfortunately, the title track itself is pretty tame inspirational pop; it isn't bad, it's just largely forgettable.

On an EP mixed with hits and misses, the most interesting song choices are the covers. They sound exactly as you might expect, but hearing "The Middle" and "Yellow" recontextualized into spiritual settings actually works quite nicely. They clearly fit into the narrative Assad is depicting. Assad should be commended for diving headfirst into a fairly unfamiliar instrumental disposition, even if it doesn't always provide a unique listening experience. What's most pleasant about Eden is the lyrical peace Assad seems to have found. As she says on "Find You," "If I make my bed below the earth/I will find You." To be able to sing that and truly believe that takes a lot of work, and that faith process shines throughout the entirety of Eden.