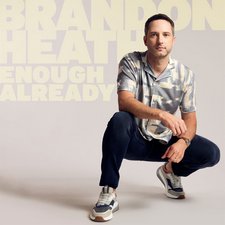 
Brandon Heath, who might just be CCM's most relatable and personable hitmaker, seems to have trouble picking a lane. When the singer-songwriter released Blue Mountain ten years ago, it seemed like a "eureka!" moment of self-discovery; it was the perfect culmination of everything Heath had released up to that point, and the Americana-tinged folk pop sounded like the genre Heath would call home for the foreseeable future. The past decade panned out quite differently. 2015's No Turning Back was similar to Blue Mountain, but it shied away from that album's darker and more conceptual leanings. 2017's Faith Hope Love Repeat was debatably Heath's first full-blown pop release, honing in on the most radio-friendly elements of Heath's output, with a perceptible aroma of trend-following. Many fans and critics, myself included, wondered if Faith Hope Love Repeat signaled an end to Heath's days as a folksy storyteller with an acoustic guitar. I'm happy to report that Brandon the Storyteller is still alive and well, although 2022's Enough Already provides only a few glimpses into that style of songwriting.

Overall, the release of Enough Already results in a lengthy list of good news/bad news. Here's the bad news: following a wait of nearly five years, the album is brutally short, featuring merely eight tracks (following a career where every previous full-length contained eleven songs); of those eight, four songs were released as singles, meaning that half of the album has already been streaming for the past two months; fans hoping for a "return to form" will need to wait, as this album doubles down on Heath's modern pop trajectory; and for those who've been following Heath's career closely, you'll notice that the album is missing his excellent 2020 single "Faces on a Train." Yet, here's the good news: for fans of Faith Hope Love Repeat (or modern CCM/pop in general), Enough Already is an improvement and a step in the right direction for Heath as a pop artist; the brief length of the album has its perks, resulting in a breezy half-hour that's free of filler or fluff; some of the album's best songs weren't released already as singles; and lastly, it's simply nice to have Heath back after such a long break, sounding charming as ever and more self-assured as a pop singer now than he did five years ago.

Placing all of those big-picture observations aside, the songs present on Enough Already are uniformly quite good, kicking things off with the memorable and encouraging single "Human Nature" (a track that's only weighed down by a clunky spoken word section during the bridge). Elsewhere, "Another Song About Love" (written with and produced by Apollo LTD) sounds like a refinement of 2017's "The Future is Bright"; this single showcases Heath's growth as a vocalist as well as his willingness to branch out, as heard in the track's luminous vocoder-drenched chorus. "Moment by Moment," perhaps the album's strongest tune, crafts a catchy pop hook without being overly peppy or cloying. Words like "peppy" and "cloying" might apply to tracks like "This Changes Everything" or "See Me Through It," but nothing here is bad, especially if you're willing to accept CCM's genre conventions.

Your mileage with this set may vary depending on your own tolerance for happy-sounding pop music, but as always, Heath's lyrics elevate the affair with his usual wit and wisdom. Many of the compositions here are subtly clever, with many of the song titles holding double meanings. He sometimes digs into redundant territory -- it's hard to hear a line like "I'm not who I used to be" and not think about his early hit "I'm Not Who I Was" -- but Enough Already is more thematically unified than the scattershot Faith Hope Love Repeat, returning instead to the cohesiveness seen on Leaving Eden through No Turning Back. Here, the overarching theme is allowing God to define both who he is and who we are. The "I am who he says I am" idea is obviously not a novel one; in fact, it's been rather common in recent years of CCM, to the extent where I'd even say it's been utilized destructively by some artists. Here, however, Heath handles the concept better than many others have, thanks to his concern for remaining biblical and through his emphasis on rooting ourselves in Christ, especially as heard on cuts like "That's Enough" and "He Is Not Worried."

There are two primary manners by which to critique new music from an established artist: by comparing it to the music previously released by that artist, or by comparing it to the music released within that artist's genre. By the latter measurement, Brandon Heath is still one of CCM's best, even though the output here doesn't differentiate itself much from, say, the latest (and similarly synth-pop-minded) releases from Unspoken or Jeremy Camp. Concerning the former, Enough Already is approximately on par with No Turning Back, but there are two recently-released tracks that convince me Heath could be churning out stronger albums. The first is included here as a bonus track: the acoustic version of "Human Nature," which completely outdoes its predecessor with its beautifully layered guitars, piano, and percussion (not to mention getting rid of the spoken word I mentioned earlier). The existence of this acoustic version makes me yearn for similarly organic versions of the rest of this album -- which, ironically, is probably how Heath will be performing some of these songs live. The second song is the aforementioned 2020 single, "Faces on a Train," which is an absolute gem that doesn't seem to have made much of a splash on streaming or radio. It's a gorgeous and thoughtful song that proves Heath hasn't lost an ounce of his ability to pen a well-observed story, and quite frankly, it bests everything on Enough Already. I sincerely hope that Heath wasn't discouraged from making more folksy storytelling songs due to how "Faces on a Train" underperformed; unfortunately, the song was destined to fail. Not only was it released independently during the gap between record deals (it's worth noting that Enough Already is his first album for Centricity Music following a long tenure with Provident's Reunion Records), but it was also released in the early months of the pandemic, when most people couldn't relate to seeing "faces on a train" and probably didn't want to hear a song about it, either. It's also noteworthy that "Faces on a Train" was written by Heath alone, whereas every song here has multiple co-writers. So while this album does come with my personal recommendation, fans like me who are desperately waiting for another Blue Mountain are going to have to stick with "Faces" and "Human Nature (Acoustic)" while hoping that Centricity will give Heath the opportunity soon to write more of the songs that only Brandon Heath could write.