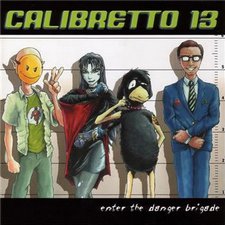 Enter The Danger Brigade starts right off with the rockin' acoustic-folk-type punk song, "High" that just pulls the listener right in. "Spoiled Brat" is another upbeat song song about having everything we want, but forgetting about God. Their cover for the song "Ballroom blitz" helps keeps up the fun and happy pace into "Fall away," but slows down a bit for "Movie Star" -- and even features a harmonica solo. "Christian Hate Mail" has a Hawaii Five-O sound, and is pumping the whole way. "The Apple Song" returns to their earlier days when they were known as Blacksheep and did everything acoustic. "Goodbye Cruel World" touches on the subject of why bad things happen in life. "Soul Stalker" is a warning to us that Satan is trying hard to pull people down, but we as Christians are called to stand up against it. The song ends with them chanting "We are the hunters ordained by the King of Kings. Our mission: spread the Word and rid the world of evil things." The album closes with "Creep," a song about gossip. The song ends with a well done a cappella section with all three members singing different parts.

There is a clear Christian message in some of the songs, along with some strong opinions. Calibretto 13's debut Enter The Danger Brigade is a very upbeat and fun album, and I highly recommend it.

In the years that Joe Whiteford has been involved in the music industry, he has always pushed the boundaries of whatever genre he happens to be in. That trend started with his first band Calibretto 13, an acoustic punk band. Instead of writing songs about the tired punk issues like girls, breakups, and rebellion, Joe decided to write songs that were either pure fun, had a message, or were a combination of the two. Another annoying punk trend that Calibretto 13 avoided, for the most part, were the songs under two minutes. In fact, one of the only flaws with Enter the Danger Brigade is that some of the songs go on for too long.

The album starts off with one of the aforementioned pure fun songs. "High 5" is a fun little ode to a best friends. The next track is a more serious song about not taking things for granted. Following "Spoiled Brat" is a cover of Sweet's song "The Ballroom Blitz." While Calibretto 13 does not do anything with the song that any cover band could do with it, the song accomplished its goal of being uncompromised fun. With a catchy beat, an important message, and some great vocal work done by Joe. "Fall Away" is one of the many highlights on this great album. The song tackles the issue of how easy it is even for strong Christians to fall away.

While the message on "Movie Star" isn't as powerful as the one that preceded it, the song still has a great message for teens. It doesn't hurt that the band has a lot of fun with the track. More catchy beats and strong lyrics follow on "Christian Hate Mail." The song is pointed at believers that need everyone else to share the same beliefs as them. The track that follows is a song that would become the anthem for many youth groups thanks to the band's trademark straight-forward lyrics and the humorous vocal delivery from Joe.

"Get a Life" goes right after the people who spend their life using drugs, getting drunk, and sleeping around by telling them that "...in our world you are nothing and you need to get a life!" "Goodbye Cruel World" is a personal favorite because the band tackles the difficult issue of all the evil in the world by declaring "I know there is somebody out there. I know there is somebody listening." Lyrics like these are a far cry from the lyrics of Joe's new band Harley Poe.

"Soul Stalker" follows and is another favorite of mine with its killer opening and great lyrics warning against the soul stalker. The song, unfortunately, succumbs to its own length which ultimately keeps the song from being great. The closing track "Creep" proves to be a great closer and a highlight of the album. The song ends with every band member singing which is what makes this song one of my favorite of all time.

Unfortunately, Calibretto 13 would peak with Enter the Danger Brigade and would disband only a few years later. That is a shame because the talent that was on display with this record could have propelled them into the elite of the CCM scene, but it was not to be. This is a record that anyone who is a fan of catchy music with a message should pick up.