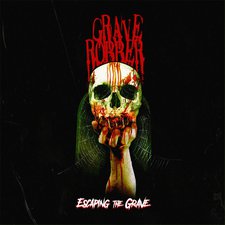 
For a little more than a decade now, the arguable leader of the Christian horror punk genre has been the Indiana natives known as Grave Robber. Led by Rottweiler Records owner Shawn "Wretched" Browning, Grave Robber has kept relatively quiet since 2011, save for one 4-song EP, while Browning focused on strengthening his label's roster with some great hardcore and hard rock acts. This year, however, the time has come for the band to rob graves once again, and it seems like they haven't lost a step at all along the way.

If you're unfamiliar with what "horror punk" is, Escaping the Grave might be a solid introduction to the genre. For those not curious enough to give it a go, it's basically what it sounds like - a brand of punk rock with elements of horror tropes added. This could be anything from creepy organs to grisly artwork to songs about death and zombies and the like. A lot of the time, horror punk vocals sound rather ghastly (on purpose, of course), though Browning's vocals are actually closer in sound to Stavesacre's Mark Salomon.

What I love about Escaping the Grave is how they play on the "horror" and "punk" aspects of their sound. Theirs is akin to a classic punk rock style and nothing like the modern or pop punk sounds of, let's say, Yellowcard or Green Day. It's fast and furious and hardly ever lets up. There's also something charming about punk songs that are under two minutes long; it's the epitome of "we've got something to say, so let's just say it and get it over with." Grave Robber has a point they want to get across to the listener, and it's an important one. And by using horror punk, they're able to communicate it with an audience that other bands might not be able to reach, as they use the ideas of the grave and rising from the dead to point to the saving grace of Jesus. To some, that might sound a little kitschy or perhaps even blasphemous, but Grave Robber is speaking the language of a culture that largely hates Christianity. Take "Zombieland," for instance. While it sounds like it could be based off of the movie of the same name, it's actually a parabolic song about our society's addiction to media and entertainment that almost subliminally programs them to act and think a certain way without thinking for themselves. "The Night Evelyn Came Out From The Grave" goes hand-in-hand with the album title; no, it's not about a zombie named Evelyn, but about a woman named Evelyn finding the Lord, escaping the grave, and coming to life in Jesus' name. There's more to Grave Robber than meets the eye.

Full disclosure: I'm not into horror stuff. I don't consume scary movies or video games and horror punk generally isn't in my wheelhouse. But with Grave Robber being an evangelistic act first and foremost, the grotesque and the evil-spirited fall to the wayside, being replaced by hope and a message of the Kingdom of God. Punk music is a relatively niche genre, and Grave Robber's take will be even more so, but if your musical palate is craving some new flavor, I'd recommend starting with Escaping the Grave and going from there.