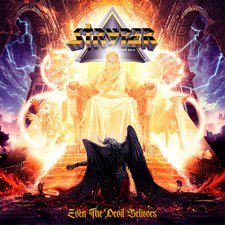 Stryper
Even the Devil Believes


Stryper is a band that needs no introduction. Getting their start in the hair metal hey-day of the 80s, they went on hiatus through the 90s and returned in the 2000s. Since that rebirth, the band has consistently churned out albums full of new material (along with covers and redone favorites albums). After 2018s controversially titled God Damn Evil, Stryper is back with the slightly tamer sounding Even the Devil Believes. Although carrying on the almost non-stop rock on this album, there are a couple notable differences.

One involves the themes explored here. If the previous record was an angst-driven condemnation of sin, this new release focuses more on love. There are some gospel-centric tracks, like Blood From Above and Let Him In, while the other tracks seek love and peace (rooted in the gospel) for the listener. Consider songs like Make Love Great Again (a slight rebuke to a certain Presidents prickly personality?) and Do Unto Others, both seeking to draw the hearer into being more compassionate. In the latter track, theres something powerful about having Scripture thrown at you in an arena-rock song that makes you think twice and more deeply about the source verse. Elsewhere, the title track warns against false piety, This I Pray gives the album a ballad about wanting to live, and For God and Rock n Roll acts as an anthem for the believer that will likely become a live favorite (if concerts ever become a thing again). The closer, Middle Finger Messiah, is another entry in a growing list of Stryper song titles that turn your head. This one is a somewhat weaker offering. Its about how the world gives Jesus the finger and rejects Him. The point is clear, but the song itself feels unnecessary, especially when For God and Rock n Roll would have made a great closer in its own right.

The other difference involves the music. God Damn Evil felt like a step towards a more 90s rock sound. Even the Devil Believes pulls things back to the 80s. For some fans who just want more of the same for Stryper, this will scratch their itch. For others who want to see some development in sound (even if slight), this record might not rank as highly on personal lists. The music itself is good, as the band uses a variety of tricks to make the songs interesting, but the experience is starting to feel too familiar. For instance, the chorus to Do Unto Others feels like their earlier hit All for One. How to Fly treads familiar ground in its Reborn-esque sound and in its message, which the band explored with For You on their 7 compilation. While its not surprising that a band thats been around as long as Stryper starts using similar melodies or structures, it may be time to do a little experimentation to keep things from getting stale.

What makes Stryper a fun band to listen to today is their insistence on recording straight-up rock records while continuing to infuse their songs with the gospel message. Lead singer Michael Sweets songcraft has greatly improved since the 80s, and Strypers newer catalogue is the better for it. The messages of love and peace in Even the Devil Believes feel especially potent for our current moment. Fans will undoubtedly enjoy this album. Newcomers will also be welcome, though this record may not be the best representation of the band.