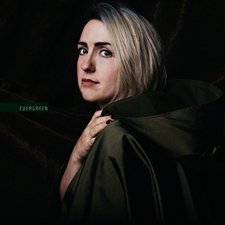 
Lately, it seems as if a lot of Christian music's most influential musicians have experienced seasons of deconstruction. We've seen a number of individuals take hiatuses in order to work out their beliefs, such is the case with accomplished worship artist Audrey Assad. This helps to explain the four-year gap of original songs between Fortunate Fall and her newest release, which piques curiosity as to how this will impact her lyrics as well as her sonic choices. After all, it would make sense for one's art to be drastically altered after re-working the foundation of said art. Interestingly enough, Evergreen is less of a departure and more of a refinement for Assad, featuring the contemplative and transparent art that she has been known for with a greater sense of confidence and triumph.

In our "Highlighting 2018 - Part One" article, staff writer Josh Balogh noted that he hoped for "thoughtful commentary on life, love, politics, and the Kingdom around simple but catchy piano melodies." With Evergreen, that's exactly what we get. Nearly every song is piano-driven and set within the context of recognizable pop progressions and ambience. The vocal programming (which Assad played a large role in) throughout is incredibly tight. Although this album features the most electronic influences in her discography, everything still feels organic - a testament to Chad Howat's production.

Although the simplistic songs (like "Teresa" and "Irrational Season") are trademark Assad, the ones outside her comfort zone work best. The cinematic edge on "River" propels excitement and returns last year's favor by featuring Propaganda. Perhaps this connection is intentional, but it sounds quite a lot like "Made Straight" from Prop's Crooked, which featured Assad on its chorus. Following that is "Unfolding," a deeply solemn and haunting ode to the uncertainty of deconstruction ("Jesus Christ/I don't know what I am/Am I a lost little lamb/Or a wolf in sheep's clothing?"). The unsettling delays and background noise make for a truly emotional, sympathetic listen. I would have preferred for Assad to dwell more within this soundscape, but its short yet sweet flavor is much appreciated.

Another example of experimentation comes from the Gaelic "Wounded Healer." Its incredible synth hook and plethora of background vocals make for the only happy song in the bunch. These moments of expansion prove that Assad can really be a versatile musician, but it's also hard to deny that the classic builds on "Teresa" and "When I See You" work pretty well. The latter starts with a somewhat cheesy 80s-sounding intro - a number of songs do this, but they all develop artistically in unexpected ways. The only song I was disappointed with is "Little Things With Great Love." The lyrics are hymn-like and beautiful, but the music feels rushed and out of place, particularly since it's low in her register. It pales in comparison to the version found on last year's Volume 1: Work Songs by The Porter's Gate, but other than that minor setback, the rest of the tracklist is solid.

As always, Assad remains impressive in her use of imagery. The album's opening lyrics immediately place you in the context of its story: "God on a cross/Who would have thought it?/This place looks nothing like Eden/There is no death here in the ruins/This is the land of the breathing." It's clear that doubt is a hue that Assad chooses to paint these songs with, and I've found myself constantly struck by this particular line found on "Teresa," "So I reach out my hands to find you where you have been hiding/Maybe I'll see you deep in the eyes of the dying." The idea of looking to those in suffering when you can't find Jesus is understatedly powerful. It's clear that Assad has transformed the questions of her doubt into questions of how she can better her endless search for Christ.

Evergreen's thematic narrative details the messiness of deconstruction that eventually leads to a new, more irrational faith. According to Assad, this is the result of an incessant pull towards Christ; this kind of perspective is what makes Assad such an important creator of worshipful art. Greater musical variation might have made for more standout songs, but Evergreen is still undoubtedly captivating.

"The tree of life is evergreen." Indie pop darling Audrey Assad brings a message of hope, peace, and reconciliation with her newest album Evergreen. Most of the album is musically simple, mostly carried by Assad's powerful voice and message, though "River," which features Propaganda, is certainly an interesting track on the musical front. Personal favorite tracks include "Evergreen," "The Joy of the Lord," and "Wounded Healer." Check out Evergreen for some wonderful new worship music that stands out from the crowd. - 3/5/18 Scott Fryberger