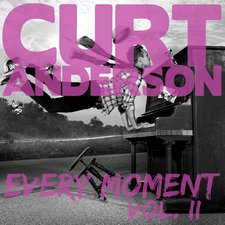 
These days, the notion of an artist putting out a deluxe edition of an already-released album, oftentimes only a few months after the original version first saw the light of day, is just about a sure thing. To his credit, Curt Anderson waited over two full years before revamping his debut effort, Every Moment, and sharing it with his fans. And while many a deluxe rendition is simply a matter of tacking a few additional cuts onto the original release for good measure, the second iteration of Anderson's freshman project features a full five tracks that weren't on the first outing and supplements those with remixes of three of his singles along with six demos and five work tapes of various songs from the first album - all of which means that, in the strictest sense, no part of the new record has been heard until now.

The all-new offerings run the gamut, from the scintillating razor-sharp pop of "Keep Me Falling" and winning quiet-storm balladry of "Identity" to the breezy, upbeat dance-pop of "No Matter What" and contemporary worship textures of "Honestly" and "Heaven Come Down" - the latter two of which are noticeably less engaging than the first three. The remixes of "Love Like You Love," "Keep Me Falling" and "Every Moment," on the other hand, are a more unified affair, thanks to their infectious overarching soul-meets-pop vibe that should go a long way toward pleasing fans of artists like Justin Timberlake and Jordan Feliz.

The remaining demos and work tapes will either seal the deal or give the listener pause, depending on their already-existing level of involvement. Hardcore fans will find these entries a definite selling point, providing a keenly interesting glimpse into the creative process of what is arguably a fairly solid set of compositions. Not-quite-so-enamored listeners, by comparison, may find the less-polished quality of these cuts, along with the fact that just about every track on the record appears in two or three different versions, insurmountable twin stumbling blocks. All of which means that those in the first camp should (and, truth be told, probably will) scoop up Every Moment Vol II without hesitation, while members of the second group will be better served by fashioning an EPs worth of tunes by downloading the trio of remixes together with the three best all-new cuts.