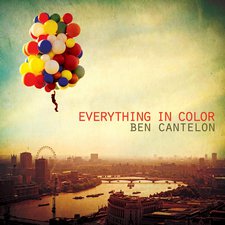 Ben Cantelon
Everything In Color

Ben Cantelon, the Canadian-born worship leader currently residing in the UK, keeps himself quite busy; while leading worship alongside Al Gordon and Tim Hughes at Worship Central, he's many times flown under the radar in writing and co-writing many recognized worship singles such as "Happy Day," "Love Came Down," "Savior of the World," and many more. In the meantime, he finds the time to record his own material, and Everything In Color, his third album released by Kingsway, continues the trend of his worship style... one that's been heard many times previously.

At its best, Everything In Color does feature some endearing and likeable variety. "My Guardian" features unique synths from beginning to end, while the slower "Be Exalted" and "Love Divine (Purify)" balance the album out neatly with vertical contemplative atmosphere, even if they aren't particularly groundbreaking in their construction. Everything In Color's opening title track, however, is by far the album highlight, and it sets up the album's theme from the get-go as God's illuminating power ("the world comes alive, you've opened my eyes.../no more black and white, because I've seen the light, everything I see is in color"). Though this chorus isn't especially substantive, the music builds up like a crescendo; it fits the song's intended power of revering God's creation. As a result, the album's beginning leaves a particularly delicious first impression.

It's too bad, however, that it's right after the album's first track that things go downhill, both with the album's generals and particulars. With Dove Award winning producer Jason Ingram at the helm of Everything In Color, the glossy exterior really prevents the record from becoming anything especially interesting beyond what most other contemporary worship albums already offer. In some ways, this keeps the album from distracting the listener to completely reflect on each song's worshipful nature, but that's not the only goal for a professional musician to meet, both in and out of the worship genre. "New Day" is exemplary of a modern pop rock worship archetype in and of itself, accurately summarizing the entire album's concept: peppy guitars and percussion with optimistic vocals always treading safe ground. These elements aren't bad by themselves, but the bulk of the rest of the album majors on meeting these requirements and not much more than that. "Savior of the World" feels like a direct copy of the more recently heard version on the Newsboys' worship album God's Not Dead. Granted, Cantelon is the original songwriter, but one could just substitute Michael Tait's vocals for Cantelon's to get the near-same recording when there should be greater disparity between the two.

Ben Cantelon's Everything In Color checks all the boxes of a marketable worship record: polish to a shine, easily singable songs, inarguable production value, and an earnest spirit for corporate worship. However, these elements combined don't immediately translate to excellence, and more than once on this record, the listener gets an uneasy "I've heard this before" feeling. It's hard to get around the fact that other Christ-seeking worship leaders on Kingsway's roster have better to offer musically than Cantelon's efforts heard here, and regrettable as it is, despite Cantelon's worshipful heart of gold, Everything In Color is nothing more than average.