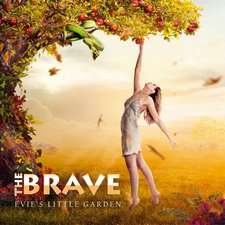 
After a long hiatus, classic rock act The Brave return with their first full-length album since 1994. After releasing two albums in the mid-nineties garnering a bit of acclaim, the band tragically lost their singer/drummer in 2007. What would normally signal a band's swan song turned out to be a kick in the pants for some new material. An EP in 2014 furthered the momentum, culminating in the present with Evie's Little Garden.

To start off, the production quality here is leaps and bounds beyond anything the band has put out before. The sound is crisp and soaring with the genre standing firmly in the likeness of arena-rock acts Journey, Stryper, Bon Jovi, Guardian, Boston, etc. The guitars are crunchy, with solos aplenty, and there's quite a bit of melodic lines and harmonies that add finesse and depth. Stayce Robert's powerfully wailing vocals remind me of Bon Jovi, Dale Thompson (Bride), and even Tobias Sammet (Avantasia).

Opening with the stop-start riff of the title-track, the pristine harmonies of the chorus provide a massive hook... I'll leave it up to you whether or not it's borrowed from Boston's "Peace of Mind." The album-permeating theme of separation from God and redemption is introduced here, as the song explores the Garden of Eden and sin's entrance into our world. It's an appropriate way to begin the album as this idea implicitly drives the rest of the album. Missions-focused through and through, the band constantly implores sinners to find Christ, which is to be commended, but it can come across as surface level in just how "on the nose" this focus is. There's little room for nuance here, and this "take it or leave it" attitude reminded me of Stryper and Whitecross in their heyday. "Run To You" has one of these "on the nose" choruses that unfortunately doesn't have a working rhyme scheme, "Jesus, I will run to You/resting in the shadow of your wings/Father, give me the strength so I can be a voice for you/in the darkness there must always be a light."

The rest of the album continues the high-quality rock in "Elevate Me" and "We're Not In Kansas Anymore," along with the synth-heavy "And We All Fall Down" and the awkwardly introed "Creep." The back-alley vibe of "Lonely Bones" is a bit of an outlier, sharing a compelling message of compassion to those in depression; this song reminded me of Petra's heartbreaking "For Annie." "Lucid" probably has the most innovative theme here, drawing from 2 Corinthians 4, "They wear their blinders and they don't even see/the gift that waits for those who choose to believe/inside a war we can't see/we could be lucid." The power ballad "Come To Me" is probably the only track I would label "filler," but the emotional guitar outro might be my favorite on the entire album. Closer "Love: Automatic" is fun and has a solid message, but just crosses over the cheesy line, making it seem more at home in a youth conference than a rock album, especially its "everybody say 'yeah'" section.

Evie's Little Garden once again proves that quality Christian rock is out there, you just have to go looking for it. Sure there's riffs that sound borrowed from other songs, and there's lyrical growth to be had, but the band isn't trying to reinvent the wheel, and that's okay. Bottom line is: if you are a fan of 80's melodic rock with a gospel message, stop what you're doing and grab this album; you won't be disappointed.