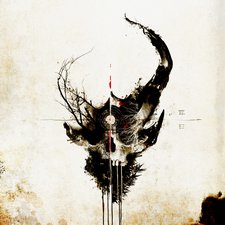 At this point in time, Demon Hunter fans around the world are undoubtedly overjoyed for March 18th and the next chapter in a rather impressive discography. The World is a Thorn and True Defiance are the metal group's last two releases and are arguably their heaviest albums to date. Many had to be wondering if Demon Hunter would continue this trend or try something different on Extremist. Honestly, the album title alone gives the sense that it will be full of metal mayhem. In actuality, Extremist is without a doubt the softest album in the band's history. That isn't to say there is no Demon Hunter metal flare, but the softer tracks seem to dominate overall.

"Death" opens the record with a Latin chant as the drums and guitars build. As the chant reaches its pinnacle, a bell rings out followed by Ryan Clark's signature scream. Demon Hunter has a knack for opening albums with blistering paced metal jams, but this time opt for a much slower, but just as heavy, metal number. "Artificial Light," a song that has already been released, follows and is closer in sound to their typical opener. "What I'm Not" is third on the track list and feels more like straightforward melodic rock. The most enjoyable part of the song has to be the guitar solo found within; there are juicy solos to be found all over this record. "The Last One Alive" comes in with the first of the expected slower, cleanly sung, songs. "I Will Fail You" follows suit as Ryan sings about the predictability of human failure. Clark sings honestly, "I will fail You to the core." The guys pump the energy back up a little with "One Last Song," but it still doesn't reach the intensity fans have come to expect in recent years. Next up is probably the best of the bunch and will undoubtedly have some fans questioning the lyrical content. As you start to get caught up in the head banging, you suddenly hear Ryan scream, "Not one of you bastards has a cross to bear!" Though some are sure to rush to judgment, the term, often used in a profane way, is actually used within context. In the lyrics, Clark voices his anger over the flippant use of an adage so often recited in today's society: "That's my cross to bear." In an explanation of the lyrics, Ryan clarifies that the sacrifice Jesus gave on the cross is sacred and to trivialize the cross with everyday hardships belittles what Jesus actually did for humanity. The word "bastard" is used to show that people who use these words so brazenly have no relation or knowledge of their Heavenly Father.

"Hell Don't Need Me" is the next slow song. It sounds eerily similar to the other slow tracks on the record, as well as those from Demon Hunter's past, and gets lost in the mix a bit. "In Time" gets things moving again with screams and high-speed guitar and drums. As you begin to get into the sound, the music falls off for the chorus, but does feature a pretty nice transition back to the faster verse. "Beyond Me" has a darker tone in the verses, but opens to a brighter, and softer, sound for the chorus yet again. It would have been interesting to hear a song like this retain that darker feel throughout. Another album favorite is "Gasoline." As the song starts off, it is reminiscent of something like "Heartstrings" or "Carry Me Down." In the chorus, however, it does the opposite of the previous two tracks. As the guitar builds during the pre-chorus, Ryan sings, "We can smother out the flames," and follows it by a screamed, "with gasoline!" The chorus has a heavy grooving guitar and a really nice sound. Sadly, the slower and somewhat forgettable "The Heart of a Graveyard" closes the album out. The melodic chorus is actually closer to pop-rock than the signature DH metal sound.

Coming off two really great and heavy albums, it's possible that a step back in intensity could have been expected. Normally, Demon Hunter's slower material is still stellar, but Extremist, as a whole, feels a little lacking. I definitely wouldn't classify it has a bad a record as it is surely an enjoyable listen, but instead, another word comes to mind. Safe. I would ordinarily never put the term "safe" and Demon Hunter in the same sentence, but that's what Extremist feels like. While there are some great tracks that aren't necessarily safe, especially something like "Cross to Bear," but overall it seems a tad scripted. Thankfully, Ryan Clark and his bandmates write a great script. While it is highly unlikely that Extremist will go down as the group's best to date, it will serve as another entertaining chapter for fans to consume. After the newness wears off, fans will probably start to wander back to something like True Defiance for their Demon Hunter fix. However, those who typically think the band's sound is a bit much, or too heavy, are likely to enjoy the vast majority of this record. If anything, Extremist proves that even when this band isn't at their best, they are still better than most.

One could argue that Extremist is the album Demon Hunter had to make after their recent history. After two albums in a row that were progressively more and more lyrically aggressive and musically heavy, it only makes sense for the band to try dialing things back a notch. Nevertheless, it's hard not to be at least a little disappointed with the end product. Despite what its title may imply, Extremist features a lot of clean choruses and quasi-ballads, which is not necessarily unusual for Demon Hunter. The problem is many of them just aren't as powerful or creative as efforts on previous albums. "I Will Fail You" is sufficiently moody and introspective but nowhere near as musically progressive as a song like The Triptych's "One Thousand Apologies." "What I'm Not" is decently aggressive in the verses, but the chorus is positively anemic. "In Time" suffers from a similar problem, with a really nice hard-hitting fast-paced screed in the verses that inexplicably shifts into a plodding clean chorus that undercuts the song's momentum. Meanwhile, "Hell Don't Need Me" is simply dull in its entirety. And the hands-down worst track, "The Heart of a Graveyard," might be the most generic modern rock song Demon Hunter has ever recorded. With the exception of the latter, none of these songs are necessarily bad, they just aren't as good as they should have been. There are, of course, great tracks on this album also. "Artificial Light" has a nice melodic death metal influence, similar to European bands like In Flames and Scar Symmetry. "The Last One Alive" and "One Last Song" are both examples of good applications of a clean chorus. "Gasoline" bucks the trend of plodding, moody ballads by breaking out into a really nice breakdown. "Death," "Beyond Me," and "Cross to Bear" are all solid tracks, but still not as memorable as what we know this band is capable of. In the end, Extremist is a very good album that is still better than what many other bands are releasing, but it comes in pretty low compared to the rest of Demon Hunter's discography. - Review date: 3/15/14, Timothy Estabrooks

Demon Hunter's latest, Extremist, is bound to surprise those who have faithfully followed the band for any extended period of time. Less processed metal and more melodic hard rock, the hardest parts of the album are more reminiscent of For Today's recently released Fight The Silence (without the biting lyricism) than anything from DH's catalogue. Of course, the Demon Hunter ballads are still there (though perhaps in greater quantities). However, I can safely say that the technical proficiency on this album is leaps and bounds beyond Demon Hunter's past releases, featuring more raw production and several blistering guitar solos. Extremist is definitely a change of pace for the band, and it will remain to be seen how their fans will receive it. - 3/17/14, Mark Rice of Jesusfreakhideout.com