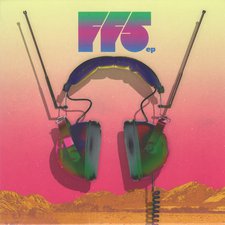 
A few years ago, Family Force 5 took a big hit when they lost their lead singer Soul Glow Activatur. The band managed to regroup, signed to Word Records, and put out a solid album with Time Stands Still. Now, a few years later, the band is dealing with more issues between their public disagreement with their label on pushing back their latest record, Audiotorium, and losing all but two of their band members. Within this messy context we are presented with the FF5 EP (not to be confused with the Family Force 5 EP from 2005), and it is fairly indicative of the band's current status of being less than their best self.

This new EP, which features five songs from Audiotorium, is more sonically cohesive than Time Stands Still, and it features a mix of pop, dance, and funk. Their signature crunk style is completely absent, so do not approach listening to this EP hoping to hear some crunk rock. The songs are catchy and fun, with opening track "Out Of This World" boasting an especially infectious hook. The deep, synthesized beat in the chorus highlights the band's ability to get your foot tapping, and maybe even break-dancing on cardboard. Similarly danceable tracks, "Sweatband" and "Tiger Night," offer a slew of electronic instrumentation and drums that are enjoyable to listen to, but are otherwise unmemorable. One unique quality about "Tiger Night" is Mr. Talkbox's high-pitched robotic vocals that you may recognize from some TobyMac songs. "Just As I Am" and "Fire on the Highway" are decidedly less dance-ready, with the former being the closest thing to a CCM song, though it's a bit more retro than the widely embraced tracks "Show Love" and "Let It Be Love" from Time Stands Still.

Unfortunately, the positive aspects of the record are overshadowed by its negative qualities. The lyrics are the biggest issue here, as they are generally cheesy ("Tiger Night"), commonplace ("Out Of This World," "Just As I Am"), or just plain senseless ("Sweatband"). They live up to their mantra of writing positive party lyrics, but the lack of substance, which is usually offset by their ridiculousness and clever one-liners, is more noticeable this time around. With lyrics like "turn sweat into gold" or "leave it all behind / it's a tiger night," it's over-the-top without being funny. On the bright side, "Just As I Am" is about God's love accepting us as we are, and though it's a familiar message, it's a welcome break from the unsubstantial feel-good lyrics.

It's unclear when (or if) Audiotorium will be released (although the band said publicly this week that it should release "this summer"), but perhaps the remaining six tracks will provide something more meaningful to help balance these tracks out. Thankfully, these five tracks are absent of the slightly suggestive undertones of their other weaker album, III. Despite the promise "it's about to get dangerous" in "Tiger Night," this is a relatively safe release for FF5. Because of the de-clawed nature of this EP and the fact the band is currently only offering this through their website as a physical product, this EP will likely stay below the radar at least until the full album releases.

The year 2018 finds band Family Force 5 hopefully soldiering forward with two remaining band members and the new, shorter moniker FF5. Late last year, the band released this five-song offering simply titled FF5 EP to little fanfare, but the question for many was "what kind of sound would we get after over three years without new music?" Fans of the crunk rock debut album, and select songs on their other releases, will be largely let down as there isn't much of the crunchy guitars of old. Track "Sweatband" tries to recapture the party rock charm, but the lyrics border on cringeworthy, and it seems like they are trying too hard. However, if you were able to make the artistic leap with them to the more radio ready pop, and even worship stylings that made up over half of 2014 album Time Stands Still, you may find a few songs to enjoy. Hands down, the best song on the album is "Out of This World," which would have made a great first single. That honor goes to the other passable song of the set, "Fire On The Highway," which is somewhat limited by the stuttering vocal hook that you'll either love or hate. "Just As I Am" is overly simplistic and begins to grate quickly, as its redundant sentiments and sounds seems like an attempt to recreate the success of "Let It Be Love," falling flat in the process. Lastly, "Tiger Night" wins the award for worst song, as it's largely nonsensical lyrics and the annoying Mr. Talkbox vocal effect wear thin, making it all too skippable. Overall, the full album will need more memorable songs to help balance these out, as these just aren't quite up to snuff with the high bar they've previously set. - 1/20/18, Josh Balogh of Jesusfreakhideout.com