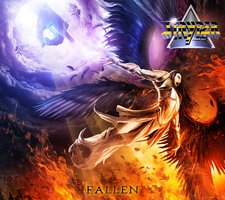 
If music lovers were compiling a list of the top hundred adjectives to describe the long-standing Southern Californian metal mainstays, Stryper, the word "subtle" would probably be pretty far down on the list, if it were even mentioned at all. Indeed, the band's '80s and early '90s albums -- and those released since reconvening in 2003 -- could well be placed in a time capsule to serve as a blueprint for future generations of budding musicians wanting to learn how to combine piercing vocals, crunching guitars and a pile-driving rhythm section into a thoroughly invigorating sum total. Aside from a few decidedly more mellow power ballads thrown in here and there over the years for good measure, front man Michael Sweet and his cohorts have succeeded gloriously in laying out said template, creating one of the most consistent and beloved back catalogs in Christian hard rock and heavy metal in the process.

Losing none of the momentum generated by the foursome's 2013 post-reunion masterwork, No More Hell to Pay, Sweet & Co. open the current proceedings with "Yahweh," an exhilarating pseudo-progressive piece which transitions from an epic-sounding choir-led intro into a straight-ahead '80s metal section, followed by a slow blues-tinged interlude, and then returning back to the choir-led groove by track's end. Shifting gears a bit, the title cut offers up a tasty slab of the sort of down and dirty, slightly dissonant melodic hard rock that paid for no telling how many mansions, sports cars and cans of Aqua Net for the likes of Ratt, Warrant and Winger back in the Reagan Decade. "Big Screen Lies" makes expert use of an almost swing-derived rhythm to propel its spot-on rebuttal of the less-than-flattering portrayal of Christians in much of the current-day media. And the powerful, boogie-based riffs that undergird "Pride" are easily as infectious as any the group has ever written.

While more than a little of the band's '80s output lost a certain amount of oomph when its members trod on softer, gentler ground, the latest project's less metal-sounding material is, surprisingly enough, some of its most impressive. The sugar-sweet, heavily-layered harmonies of "Love You like I Do" join together in perfect unison to make it a slice of pure pop heaven. "After Forever" finds the Stryper lads augmenting the venerable 1971 Black Sabbath classic with ever so slight traces of the tuneful glam rock stylings of artists like Slade and The Sweet, with thoroughly inspiring results. And "All Over Again" -- which sounds like a combination of Bon Jovi's "Never Say Goodbye," ELO's "Telephone Line" and just about every power ballad written between the rise of MTV and the fall of hair metal -- is an absolute triumph. If "Honestly" and "I Believe in You" had sounded like this back in the day, it's likely that even the most metal-loving members of the fan base would have given them the thumbs up when they first heard them.

Toward the end of the record, things begin to get a bit too repetitive, with the last few tracks sounding curiously similar to those that came before them. Of course, the closing cuts are redundant only in context. Taken on their own merit, they would probably constitute two thirds of a pretty convincing EP of well-crafted offerings that would have slotted in nicely alongside the material on any of the group's first four albums. Still, the presence of the last few songs does ultimately render Fallen marginally less impressive than No More Hell to Pay. With the weaker compositions excised, though, the latest effort easily stands shoulder to shoulder with its most immediate predecessor, which is saying plenty given the fact that the 2013 release was, hands down, the strongest artistic statement made by the quartet in the post-millennial time frame, if not since its inception.

When it first saw the light of day last year, Sweet's most recent solo undertaking, I'm Not Your Suicide, was viewed as something of a misstep by those who considered its eclectic pallete at least partly responsible for its somewhat hit-and-miss nature. In hindsight, however, it would seem that the solo outing, intentionally or not, functioned as a sort of stepping stone on the way to turning out a project like Fallen -- one whose most potent asset lies in the way its seemingly incongruent individual pieces join so seamlessly together to form such a cohesive and convincing final product. Members of the glass-is-half-empty crowd might choose to view the new record as an all-too-daunting high water mark that its creators couldn't possibly hope to match, much less improve upon. That being said, if the momentum built by the band's extraordinary last few efforts serves as any indication, the smart money would lie on Sweet and his supremely-talented colleagues being able to do just that.