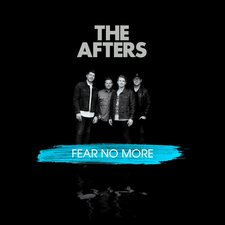 The Afters
Fear No More


The Afters are closing out the decade strong with 2019's Fear No More, bringing to culmination the stark shift towards modern pop that began on 2010's Light Up the Sky. The band has been a radio staple since that effort, and by leaning into their synth-pop tendencies with more confidence, honesty, and exuberance than ever before, they've created an album that's stronger than the preceding three. And while it may be easy to draw a line between The Afters' albums of the 00's and those of the 10's, Fear No More also honors the rock legacy of the band's first two albums, fan favorites I Wish We All Could Win and Never Going Back to OK.

For fans of the debut album, the most obvious feature of Fear No More is the band's brand new version of the song "Wait," which has been transformed from an acoustic song into a piano ballad featuring MercyMe, which honors the original while hearkening back to the early days of the band when they opened on tour for MercyMe and the two bands would sing "Wait" on stage together. The song also makes the perfect foil to lead single "Well Done," which draws beautifully from Scripture to present what all faithful Christ-followers can hope to hear when they finally enter into God's glory. Also, for listeners who prefer the band's earlier works, album highlight "Forever and Always" should be perfect for fans of "Keeping Me Alive," and "Welcome to the Future" is right in line with "We Are the Sound."

A huge benefit of committing to key-led pop songs is that, throughout this album, guitars are used to accent the songs rather than carry them, and songs like opener "What Home Feels Like," "It All Starts Now," and the aforementioned "Future," are colored with tasteful and active guitar riffs that make the songs far more interesting and layered than they might appear on a cursory listen. To be fair, some of these tracks are more experimental than others, but there's an assurance behind each number that the band always knows exactly what they're doing, whether it's making a song for believers or making a song for radio or making a song for media syndication. Every step of the way, it all feels authentic, honest, and real.

Gone are the anthemic battle cries that made up both some of the best, and the worst, moments of the past few records. If your response to hearing Live on Forever's "Legends" was, like me, "This sounds really cool, but I totally forgot what band I was listening to," then you're in luck: everything on Fear No More is the sound of a band who knows exactly who they are and what they're doing. While the lyrics can still be the band's weakest point (the bridge of "It All Starts Now" could have been absolutely transcendent if not for an overly obvious and cliche fire/higher rhyme), there are also lyrics here that represent the most honest and meaningful of the band's career. For example, "I Will Fear No More" explores the band members' struggles with anxiety (as detailed in this episode of the JFH Podcast), and yet the result is something intrinsically Christ-centered. And while there may be cheesy or obvious lines here or there, it's admirable that the band doesn't shy away from singing about Christ on some songs while also not unnecessarily shoehorning Christ into the songs about family, culture, etc.

Fear No More is The Afters' best album in over a decade, made all the more impressive by the fact that most of it was produced by the band's own drummer, Jordan Mohilowski, who imbues each track with life and pitch-perfect sheen. (Side note: for listeners who really appreciate the style and/or production of this album, I highly recommend Mohilowski's side project, In Paradise -- start with the single "Who's Ready?") This is exemplified perhaps nowhere better than the album's hidden gem, "Dancing on Top of the World," a sparkling dance smash that packs so much into less than three minutes that the most obvious response to hearing it is simply playing the track again. It's the sound of a band rejuvenated, and The Afters can make the 2020's as successful as the 10's by continuing to make albums just like this.

The Afters have been a staple name in the CCM industry for quite a while now, and rightfully so. The band has a history of crafting accessible pop albums that appeal to the masses, and they continue that trend with their latest endeavour, Fear No More. This album focuses on the recent ups and downs the members have faced, and how God has been there for them through it all. Musically speaking, they take more of a reserved approach overall compared to their last release (those looking for another "Shadows" or "Legends" will be disappointed); however, there are still plenty of enjoyable moments on the record.

The band is arguably best known for their heartfelt ballads that come with each release, and Fear No More once again delivers in this department. From the sweeping title track, to the moving "Well Done," the group showcases their ability to craft music that both encourages and strengthens the listener. Upbeat moments such as the peppy opener, "What Home Feels Like," and the EDM influenced "Welcome To The Future," keep the album moving, and help break things up at the right time. An album highlight is "Lightning," a catchy tune that begs the listener to dance along: "You came like lightning and saved my soul / Rolled in like thunder and shook my bones / Now I'm dancing in the rain / Since You called out my name / You came like lightning and saved my soul."

Even though Fear No More doesn't necessarily rewrite the pop formula, the band succeeds in creating an enjoyable and uplifting record. Listeners will find a healthy balance between the slower, honest moments ("I Will Fear No More" and "I Run To You"); and cheerful tunes ("Lightning", "It All Starts Now"). Fans of The Afters will certainly be satisfied with the array of songs featured here; and those looking for a solid pop record to spin this summer should consider this album as a contender. - Review date: 5/16/19, James Larsen of Jesusfreakhideout.com

After taking a few steps forward with their most recent LP, Live On Forever, it's a little disappointing to see The Afters somewhat regress/relapse with their newest offering, Fear No More. There are no "bad" tracks here, but there are also limited treasures amidst the somewhat short album. Title track "I Will Fear No More" is one of those treasures, as is "Wait," a retooling of the track on their 2005 debut, this time featuring CCM mainstay MercyMe. For the most part, other than the aforementioned tracks, Fear No More is a near-perfect representation of how so many gifted Christian rock artists have wholeheartedly embraced rather mediocre CCM radio pop. In the case of The Afters, the amalgamation of CCM and secular pop radio is a bizarrely impressive happening, although not one which leaves this reviewer particularly excited for the future. - 5/29/19 David Craft