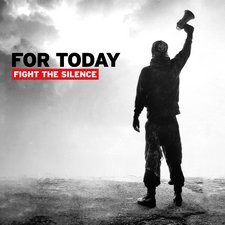 For Today
Fight The Silence

Christian metal stalwarts, For Today, have built a pretty serious reputation for themselves in just a few years. Of course every album has brought a hardcore edge, but with each they continue to grow and evolve. Their newest album is no exception to this trend. The album's title is inspired by the continually growing issue of human trafficking, both here in the US and worldwide. This nasty form of modern day slavery pushes men and children into forced labor and women into prostitution all for the hope of one day "paying" their captors the cost of freedom. False hope and promises lead to a never ending cycle for these victims. Mattie Montgomery and company have decided to step-up and Fight the Silence of those who would pretend that this isn't an issue in today's society.

The record opens with "Molotov" and sets the pace at amazing. The opening lyrics to the album ring out, "Burn it down!" While I'm personally an old school hardcore fan, I can't help but love the new school twist For Today puts on the genre. In a somewhat different fashion, and probably to sell seriousness of the point, "Fight the Silence" starts off softly with clean vocals. Mattie Montgomery sings, "Eye to eye. Face to face. Still we don't see them, we look away. Still they cry, but no one is listening. When we will we open our eyes?" Just as you start to get lulled into this slower tune, the guitars kick in full-throttle and Montgomery screams, "Open our eyes!" The remaining lyrics are just as powerful and are a plea to end human trafficking and "set the captives free." While the first two songs serve as a great start, the best track on the album may come with the third. Some ambience followed by slow chugging guitars opens "Pariah" and the initial lyrics are enough to send a chill up your spine. "I will never bow down to your idols; I know who I am. You'll have to put me in the ground to silence me; this is my final stand. You can't kill me I'm already dead; this is the martyr's cry. So as the crowd demands my head my time has come to die." Even better is the opening of the verse as Montgomery growls, "Death is only the beginning of everything I'm living for. This is my final stand laid upon the altar." This is possibly the group's best song to date and features so many remarkable lyrics. The band has embraced their role as outcasts from the world and proudly shows their devotion to Christ. Musically, the guitar run that is featured from the 2:33 to the 2:48 mark breaks up the chugging and adds a great element to the composition.

"Reflections" is a bit experimental for the band and adds a lot of ambience to simple music and clean vocals. It's an odd word to describe a song by a metal band, but the track is actually quite beautiful sounding and leads nicely into the much heavier "Break the Cycle." "A Call to Arms" serves as a serious kick in the face - in a good pounding metal sort of way, of course. The slow build of feedback and quick finger work on the guitar leads quickly gives way to the sudden shrieked screams, "Let desperation have a voice you can't ignore." "For the Fallen," "Fatherless," "Dead to Rights," and "One Voice" complete another string of metal brilliance that all feature noteworthy instrumentations. "Resonate" harkens back to the sound of "Reflections" from earlier. Another solid dose of soft music and ambience break apart all of the chugging and pounding while the lyrics offer hope. The song closes with the line, "You won't have to walk alone." The hardcore sound returns for the final track, "Hated By the World." The song actually has a bit of a metalcore sound musically. Lyrically, it focuses on following God and growing that relationship despite being hated by the world. Montgomery sings, "Everything I've come to love has turned against me. In a moment I've been made into the enemy; the enemy of those that claimed that they were with me. I'd been cast out of the place I once belonged." As that line is completed, the song dials back the intensity. While some distorted guitars kick back in later, the song never hits full stride again. This song and its slower paced ending serve as the perfect closer for the album.

For Today have created a masterpiece with Fight the Silence. The lyrics are at times quite blunt and at others they are extremely profound. Mattie Montgomery and his crew have brought a challenging message and, at the same time, proclaim Christ as King louder than ever before. The band has also stretched themselves musically here. While there are softer sections spread throughout, For Today hasn't gone soft. If you've dismissed them in the past as a hardcore "one-trick-pony," think again. There is plenty of hardcore metal, a good dose of experimental ambience, some melodic sections, screamed and clean vocals and so much more. Breakdowns complement songs instead of dominating them and softer guitar sections picked during all the dissonance and chugging really set songs like "For the Fallen" and "Fatherless" apart. As masters of instruments and the pen, For Today have risen to the top; there isn't a single bad track present. Not only is this a great record, but the band is also donating a sizeable amount of the proceeds to the A21 Campaign and their global effort to rescue and rehabilitate those who have been victimized by human trafficking and to expose and prosecute those responsible. If you haven't already purchased this album, you may want to check it out and find yourself tested. Better yet, go out (or hit up your favorite on-line retailer) and buy Fight the Silence immediately; it's that good.

No matter how you feel about hardcore, metal, or even For Today, it's almost impossible not to appreciate this album. Sure, the vocals may be rough and the guitars loud, but beneath the constant riffs and pounding drums, is a strong message of hope. Lead singer Mattie Montgomery and his band are no strangers to controversy or truth. In fact, they're just as well known for their authentic lyrics as they are for their meteoric rise from independence. But with Fight the Silence, they've really outdone themselves and taken their ministry to a whole new level. Musically, the majority of the album is just what you would expect. Blistering guitars and chugging riffs give way to gang vocals and technically sound drumming. It's not innovative, but it's enjoyable, especially for longtime fans of the band. Montgomery's screams sound better than ever, and the breakdowns, while not entirely groundbreaking, provide the perfect background for their message. The band did mix things up a little bit this time around though; the striking contrast provided by the electronic ambience of "Reflections" and "Resonate" is a welcome change that only emphasizes what the band has to say. Lyrically, is where this album shines. After watching a video about human trafficking, Montgomery became burdened to find a way to help spread awareness of the issue. The result is "Fight the Silence," a strong rebuke of this cowardly practice. Every other song on the album is just as powerful. Issues like persecution, poverty and forgiveness are presented in a personable and relatable way, shedding a light on the brokenness of the world and the need for Christ. For Today may not be for everybody, but their message certainly is. Fight the Silence is another excellent chapter in the band's ever-growing and impressive catalog. - Review date: 1/31/14, John Choquette

With Fight the Silence, For Today continue to do what they do best: generic metalcore with lots of eerily similar breakdowns coupled with compelling and passionate lyrics. It's fun, but far too comfortable musically. The second half of the album is definitely more interesting than the first, but the whole effort is sadly devoid of any new ideas for a band that's been around this long. - 2/5/14, Timothy Estabrooks of Jesusfreakhideout.com

If I could only use one word to describe Fight The Slience, it would be "subversive." The worship-oriented lyrics of previous releases may not be as prevalent here as projects like Immortal, but their hard-hitting message against an apathetic culture is no less righteous. In addition, For Today displays legitimate versatility integrating rock, metalcore, and melodic elements, and the production quality continues to be eons better than their Facedown days. - 2/5/14, Mark Rice of Jesusfreakhideout.com

For Today has made a name for themselves over the last few years with their Scripture-filled songs and solid theological messages, and Fight the Silence shows a lot of growth in the band's signature sound. Even those of us who are less partial to metalcore will find something to enjoy; not just established fans. The melodic elements are crisp and cutting, and the growls and shouts deliver on the mark throughout the album. Carrying innately powerful messages, "Resonate" and "Hated by the World" are my five starter song picks for listeners to sample. - 2/7/14, David Craft of Jesusfreakhideout.com