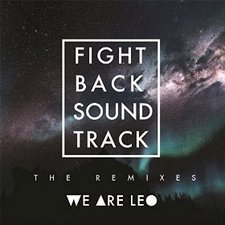 We Are Leo
Fightback Soundtrack (The Remixes)


As the music industry goes through many changes, creativity and experimentation are key to this change. Music is as easy to make as it has ever been, so it is only natural that remixes and EDM recut albums should become standard fare in the current industry. Add to that the heavily electronic roster of DREAM records, and this is one remix project that seems like a natural product of its environment. As we have seen with successful remix projects by bands like Family Force 5, there is a kind of inherent freedom with dance and pop punk music to remix and remaster songs with new elements. We Are Leo's Fightback Soundtrack (The Remixes) is one such attempt, and is largely successful.

The remixes featured here involve a solid level of composition and enough diversity to warrant at least some attention. The project starts with a remarkably appealing remix of "Diamonds in the Dark," which goes beyond just adding bass and a beat, and actually deepens the dynamics of the original cut by dropping the elements of the song occasionally to focus in on soft piano and nature sounds. A good remix should cast the original song in a new light, which this song does. The next two cuts, "Epic" and the title track from the original album, are a bit more straightforward. Though the mixes sound good (especially at high volumes with a good subwoofer), the first doesn't really add anything to a song that was already superficial, and "Fightback Soundtrack" does little to change its original either. Next is another reimagining of "Diamonds in the Dark," which is another well-mixed track, but still falls short of creating the atmosphere that the opening track does. The choice to double up on remixes on three of the tracks from Fightback Soundtrack is a strange one, since there are 12 songs to choose from on the original album. "Northern Lights" provides a relaxed, calming backdrop for the strangely worshipful tune that sounds like it could one of Owl City's more introspective tracks. Perhaps the highlight of the project is "Phoenix," which is probably the most compelling track from the original album. This track sees the inspirational anthem get a heavy dubstep makeover, and the mixing is some of the best use of this effect in the Christian market. Unfortunately, these two tracks are offset by two more unremarkable remixes of the two previous songs. This trend of repetition turns what could be an interesting experiment in reimagination into a somewhat bland and wasteful effort. Instead of coaxing out the fresh potential that a handful of the first few tracks did, we get less imaginative remixes that add nothing new to the original.

If you are a fan of We Are Leo, you will likely enjoy some of the creative twists on the original tracks here. Also, if you are a fan of EDM or synth pop, especially along the lines of artists like Owl City and Capital Kings, this is probably worth a listen. If you are not particularly into either, it probably goes without saying that this project isn't for you. This doesn't particularly add anything new to the music landscape. It is also admittedly limited in its scope, since three songs are remixed twice on an 8-track album. However, those who appreciate the sometimes underappreciated craft of electronic music may find some unexpected gems among these remixes. We Are Leo may not be modern poets with deep and thought-provoking themes, but their music endures the remix treatment fairly well and the contributors add at least enough ear candy to make things interesting.